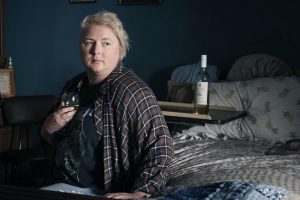 Here’s everything we know about the ITV adaptation of Graham Norton’s Holding, which will be directed by TV legend Kathy Burke.

Every once in a while, you get a TV series that really grabs your attention – and ITV’s new drama Holding is certainly one of them.

Directed by award-winning actor, director and producer Kathy Burke and starring Derry Girls’ Siobhán McSweeney (among others), Holding is an adaptation of Graham Norton’s bestselling novel of the same name, which sees a small-town grapple with a dark discovery.

And now, in the lead-up to the series’ release later this year, we’ve finally been given the first-look trailer for the series. And if the one-minute clip is anything to go by, the show it’s shaping up to be just as good as we’d hoped it would be.

Below, we take a closer look at everything we know about the series so far, including everything we’ve learnt from that exciting new trailer.

Holding is described as being a “story of love, secrets and loss” and a “darkly comic tale which shrewdly observes the lives of its characters, each with frailties, complexities and pasts they’d rather keep hidden”.

Set in rural Ireland, it follows local police officer, Sergeant PJ Collins, a gentle mountain of a man who hides from people and fills his days with comfort food and half-hearted police work.

When the body of long-lost local legend Tommy Burke is discovered, PJ is called to solve a serious crime for the first time in his career. PJ finally has to connect with the village he has tried hard to avoid.

ITV’s Our House: the trailer for Martin Compston’s next big psychological thriller is here and we don’t know who to trust

Indeed, as the official synopsis for Norton’s book adds: “The remote Irish village of Duneen has known little drama; and yet its inhabitants are troubled. Sergeant PJ Collins hasn’t always been this overweight; mother of­ two Bríd Riordan hasn’t always been an alcoholic; and elegant Evelyn Ross hasn’t always felt that her life was a total waste.

“So, when human remains are discovered on an old farm, suspected to be that of Tommy Burke – a former­ love of both Brid and Evelyn – the village’s dark past begins to unravel. As the frustrated PJ struggles to solve a genuine case for the first time in his life, he unearths a community’s worth of anger and resentments, secrets and regret.”

It continues: “Darkly comic, touching and at times profoundly sad. Graham Norton employs his acerbic wit to breathe life into a host of loveable characters, and explore – with searing honesty – the complexities and contradictions that make us human.”

Who stars in Holding?

Alongside Derry Girls’ Siobhán McSweeney, who will play mother of two Bríd Riordan, the series stars a number of familiar faces.

Is there a trailer for Holding?

Yes, and it gives us a taste of the kind of darkly comical content we can expect from the series. You can watch the full clip below:

What has been said about Holding?

Speaking about the series when it was first announced in May last year, Dominic Treadwell-Collins, who wrote the series alongside Karen Cogan, said bringing Norton’s novel to the screen had been an “exciting” experience.

“To be writing my first scripts alongside Karen and to film with Conleth and such a talented Irish cast and crew in West Cork – where my father was from and my family still are – makes this even more special.”

Also reflecting on the series after its announcement, Kathy Burke – for whom 2021 was her 40th year working in the industry – said she couldn’t think of a “better way to celebrate” such a big milestone in her career.

“It’s a beautiful piece of writing with a great story and fantastic, full-bodied characters,” she added. “All this with glorious West Cork as its setting proved irresistible.”

When and where will Holding be released?

We don’t have an exact release date just yet, but we do know the series will air on ITV and ITV Hub in March.