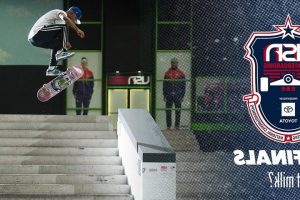 The Berrics is hosting the 2021 USA Skateboarding National Championships at its Los Angeles, California headquarters, and you can watch the video directly above. At the time of writing the contest is live, but when it’s over the entire stream will still be available for viewing.

Presented by Toyota, the contest’s disciplines consist of men’s and women’s park and street skating. Several heavy hitters — including Dashawn Jordan, Louie Lopez, Jagger Eaton, Bryce Wettstein, Poe Pinston and more — are involved as well. There’s a lot on the line for the participants: eight finalists in each discipline will receive qualifying points for the USA’s Olympic Games skateboarding team, and four national champions will be crowned as well. The contest’s field is deep, with a whopping 20 skaters competing in each discipline and vying for a shot at Olympic glory in 2024.

See the stream directly above. For more skate-related content, check out Palace Skateboards’ new collaborative effort with M-ZONE (a cult ’80s skateboarding shop in London), take a look at Skatepark Continua — a flowing concrete skatepark designed by MBL Architectes and Bureau David as part of Galleria Continua in Boissy-le-Châtel, France — and have a gander at an “Eight Inch Blunt” skate photo exhibition that features works from international artists.
Source: Read Full Article