Home » Entertainment » Chris Harrison Should Return to 'Bachelor,' Educator Working With Him Says

Chris Harrison Should Return to 'Bachelor,' Educator Working With Him Says 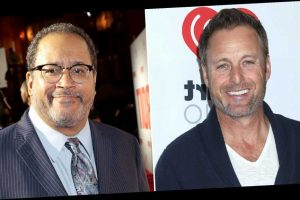 Chris Harrison has been working closely with Dr. Michael Eric Dyson after coming under fire for defending Bachelor contestant Rachael Kirkconnell amid accusations of racial insensitivity, and he’s come a long way.

The Long Time Coming: Reckoning With Race in America author told Entertainment Tonight that Harrison, 49, has been putting in a lot of work since the scandal broke.

“I think as a host, it’s extremely important for him to have been through this and to be even more deeply sensitized to the issues of race, to the issues of conflict, with history and the present, and how the franchise can embody some of the best ideals and the norms that he has now taken to,” he explained. “The perspectives that he now has — and I think he will be all the better for it — and I think quite frankly, the show will be all the better for it as well.”

Dyson told ET Harrison has been open to learning and hearing new perspectives following a controversial interview with Bachelorette alum Rachel Lindsay for Extra in February.

The educator told ET that Harrison is “genuine” in his sorrow over the controversy as well as his desire to grow from it. “[He has a] genuine expression of grief over what he did, recognition that he has apologized, and I think again, apologizing to Rachel Lindsay is extremely important,” Dyson said, calling the “Higher Learning” podcast cohost “a brilliant, brave, beautiful Black woman.”

Lindsay, 35, has faced serious bullying in the wake of the controversy surrounding Harrison, whom she expressed disappointment in after he suggested that Bachelor Nation should have “grace” with Kirkconnell, 24. The reality TV personality quit Instagram on February 26 amid online harassment. She explained her decision during a Tuesday, March 2, episode of her podcast.

“I saw something negative and I said, ‘You know what? Not today, not even this weekend,’ and currently still not now because I’m still disabled. It was the best decision that I could do for myself to detach from that negativity,” she shared. “I needed that. I feel so much better. I’m not 100 percent, but I feel lighter.”

The former attorney told Extra‘s Billy Bush she feels Harrison’s apology, issued via Good Morning America on Thursday, March 4, was the real deal. “I do accept the apology,” she revealed. “And I think it’s important for me to say that because I haven’t really talked about, you know, Chris and the statement because I’m not trying to make this a Chris vs. Rachel.”

She noted that Harrison has apologized to her several times since their controversial interview last month. “We need to move forward,” the “Bachelor Happy Hour” cohost said. “And for me, for us to move forward, I need to accept the apology, so we can all be better from this situation, which is what we want.”

Lindsay also told Bush she was grateful Harrison addressed the hate she was facing online, admitting that she “wasn’t expecting” it. “The fact that he did address the harassment and the hate that I’ve been receiving, I really appreciate that,” she said.

Harrison admitted on GMA that he is “an imperfect man,” adding that he “made a mistake.”

He went on to add, “I believe that mistake doesn’t reflect who I am or what I stand for. I am committed to progress, not just for myself, also for the franchise. And this is a franchise that has been a part of my life for the better part of 20 years and I love it.”