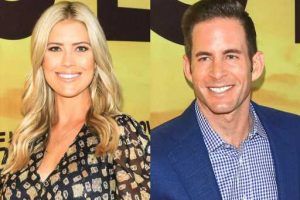 A new season of Flip or Flop is on the way, which means fans of the HGTV show will see former spouses and parents of two Tarek El Moussa and Christina Haack reunite as co-hosts of the series. While the premiere for the 10th season of the show is just over a month away, promo photos for the series are already being released, and one was posted by Haack today. But the choice in snap reminds viewers that the former couple’s relationship is not as friendly as it used to be.

The photo in question appears to be a candid shot of Haack and El Moussa checking out a space. The image features Haack already on a backyard patio while El Moussa is seen walking through a sliding door. It’s an interesting choice for a promo shot, considering how different it looks from past seasons of the show. Of course, these upcoming batch of episodes reportedly featured some on-set tension between the two stars and former spouses.

Fans of the series will recall that, back in July, reports that El Moussa blew up at Haack were making the rounds. El Moussa reportedly compared his former wife to then-fiancée Heather Rae Young, saying that Young (now El Moussa) was “hotter” and “richer” than Haack. The reported “verbal tirade” didn’t stop there, though. El Moussa reportedly called Haack a “washed-up loser,” and even allegedly said he “enjoys watching her fail.”

Haack and El Moussa’s relationship hadn’t been friendly for quite some time. The two divorced in 2018 after nine years of marriage and two kids. Even though they decided to keep working together after their split, it’s easy to see how such an arrangement could make tensions run high, and how each of their respective lives after their divorce continued to unfold — Haack went on to marry Ant Anstead in 2018, and the two divorced in 2021. Now that the 10th season of Flip or Flop is on the way, perhaps viewers and fans will get even better insight into how El Moussa and Haack are navigating their working relationship amid so much change.