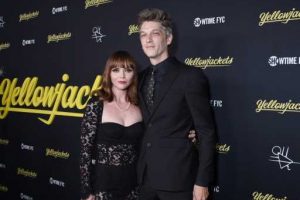 Christina Ricci is one of those celebrities who like to keep their private life relatively private (sans the adorable milestone photos of her newborn daughter). However, about 10 months after her surprise elopement with her husband Mark Hampton, she’s ready to dish on how this love is unlike any love she’s had before.

In a recent interview for Anna Faris‘ Unqualified podcast, Ricci opened up for the first time in a very long time about how it’s been going in the romance department, specifically on her marriage to new hubby Hampton.

“I would say — and this sounds really annoying and cloying and stupid — but I would say the first time I really fell in love in a healthy way is probably this marriage that I’m in now,” she said. “I think that a lot of my relationships in the past had a lot to do with unhealthy things that I was looking for.”

The Yellowjackets star added, “And I don’t know if you can call [it] love, but I don’t think things that aren’t good for you should be called love.”

Ricci and Hampton surprised everyone by eloping back in Oct. 2021, announcing soon before that they were expecting their first child together. They welcomed their daughter Cleopatra “Cleo” in Dec. 2021, becoming the little sister of Ricci’s son Frederick “Freddie” Heerdegen, 7, from her previous marriage to troubled ex-husband James Heerdegen.

While not much is known about the pair, specifically how they met or anything like that. It’s clear to see that they’re oh-so in love.

Before you go, click here to see celebrities who are married to regular people.