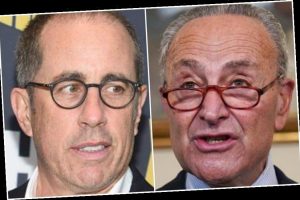 Sen. Chuck Schumer (D-N.Y.) tried standup comedy Sunday with Jerry Seinfeld, and let’s just say the senator doesn’t deserve another term at the microphone. (Watch the joke in the video below, starting at 1:40.)

Schumer was touting a bipartisan federal bill, the Save Our Stages Act, that would aid small entertainment venues hurt by the coronavirus pandemic.

But given the place, the Gotham Comedy Club in Manhattan, and location, next to the famous funnyman, the lawmaker tried a joke. He said it came courtesy of his parents who heard it from a comedian during a university class on humor.

We’ll sum it up quickly because his delivery needs work:

So Mrs. Walters is busted for stealing a can of peaches from the store. It’s her 17th arrest for shoplifting and she is brought before the judge, who sentences her to four nights in jail, “one for each peach.”

“He’s about to bang the gavel and pronounce [his] sentence when a gentleman in the middle of the room gets up, all agitated,” Schumer continued. “‘Your honor, your honor, may it please the court, I’m her husband. She also stole a can of peas!’”

The punchline got a few laughs but basically fell flat, prompting analysis from the former sitcom king.

“I see. Because there’s more peas in a can of peas,” Seinfeld explained. “So she’d be in jail longer. Because she’s annoying him.”

Schumer may be related to comedian Amy Schumer, but the legislator definitely did not inherit the funny gene.

END_OF_DOCUMENT_TOKEN_TO_BE_REPLACED

END_OF_DOCUMENT_TOKEN_TO_BE_REPLACED
We and our partners use cookies on this site to improve our service, perform analytics, personalize advertising, measure advertising performance, and remember website preferences.Ok