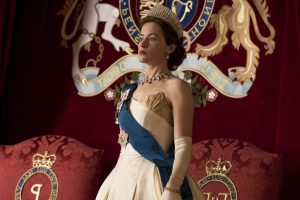 The Crown’s Claire Foy has paid tribute to Queen Elizabeth II, who she portrayed in the first and second seasons of the Netflix show.

Following the death of Queen Elizabeth II on Thursday 8 September, tributes have been pouring in for the UK’s longest-reigning monarch. As well as reacquainting ourselves with the legacy of the Queen and her deeply fascinating life through documentaries, many avid TV fans have also been tuning into (and re-watching) The Crown.

The acclaimed Netflix series has quickly risen back to the top spot in Netflix’s streaming charts, and although we’re waiting patiently for the next fifth instalment of the series, The Crown is now number two in the UK chart following the news of the Queen’s death.

The first season chronicled the Queen’s life from her 1947 wedding until 1955, and during the first two seasons, Claire Foy played the leading role of Queen Elizabeth II alongside Matt Smith as Prince Philip.

Claire Foy has paid tribute to Queen Elizabeth II, who she played in the first and second seasons of The Crown.

The role was a pivotal one for Foy who quickly became known for her stellar performance in the Netflix series. Speaking to the BBC at the Toronto Film Festival, she paid tribute to the Queen, saying: “I think that she was an incredible monarch”.

She continued: “She united people and she was a massive symbol of continuity and dignity and grace.”

Because of the nature of the Netflix series, the actors change every two seasons and the role of the Queen transferred from Foy to Olivia Colman for series three and four. In the upcoming fifth season, Imelda Staunton will be taking on the lead role alongside Jonathan Pryce, who will be taking over the role of Prince Philip from Tobiaz Menzies.

Speaking about the Queen and the role she played in The Crown, Foy added:“My main feeling is just thinking about her as a mother and a grandmother and a great-grandmother, really, and I’m very honoured to have been a teeny tiny, small part of her story.”

Claire Foy and Matt Smith as Queen Elizabeth II and Prince Philip in Netflix’s The Crown.

Foy went on to win best actress awards at the Emmys and Golden Globes for playing the Queen in The Crown and is now promoting her new film Women Talking, which she stars in alongside Jessie Buckley, Rooney Mara, Ben Whishaw and Frances McDormand.

While the fifth season of The Crown is highly anticipated and due for release this November, the writer of the series, Peter Morgan, has said that the final sixth season will halt production out of respect to the late monarch.

The Crown is available to stream on Netflix.