Home » Entertainment » Clare Crawley Accused of Lying About Prom: ‘My Husband Took You’

Clare Crawley Accused of Lying About Prom: ‘My Husband Took You’ 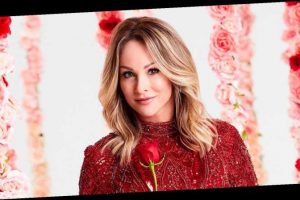 A less than memorable evening? A social media user has accused Clare Crawley of lying about her high school experience after she said no one asked her to the prom on the Tuesday, October 20, episode of The Bachelorette.

The topic of high school dances came up during Clare’s chat with Chasen Nick, who compared his younger experiences to those of a hermit crab on Tuesday’s episode.

“I didn’t have the greatest high school experience either, to be honest. I never went to prom,” she replied. “Nobody ever asked me. Nobody even knew who I was in high school. I was just invisible, I think. I felt invisible.” (Clare later gave Chasen, 31, the group date rose.)

After the photos of Clare at the dance made waves via social media, she fired back in the comments section, writing, “You do know there is more dances in high school that are NOT prom? Turns out it’s just someone digging up old photos. (Why she keeps her husband’s old dance pics I’m not sure). I went to a new school senior year and in fact DID NOT go to prom just like I said.”

Clare, who ABC named the Bachelorette in March six years after she competed on Juan Pablo Galavis’ season 18 of The Bachelor, grew up in Sacramento, California. The hairstylist currently works at De Facto Salon in her hometown.

Later on in the episode, Clare got upset when contestant Brandon Goss didn’t know anything about her history.

“First of all, you’re obviously absolutely gorgeous. But other than that, to be honest, I don’t really know anything about you. I know you’re from Sacramento,” Brandon, 28, told Clare after he said he “had to” sign up for the show once he learned she was the lead.

After she fired back, Brandon added, “I obviously don’t know you on a personal level, I don’t know your history. You’re just so beautiful and I wanted to get to know you.”

Clare subsequently sent him home. During the episode, the real estate agent took to Instagram writing, “Never been good with homework.”

Everything We Know About ‘Bachelorette’ Season 16

Clare has yet to publicly respond to the alleged photos of her at prom. The Bachelorette airs on ABC Tuesdays at 8 p.m. ET.

END_OF_DOCUMENT_TOKEN_TO_BE_REPLACED

END_OF_DOCUMENT_TOKEN_TO_BE_REPLACED
We and our partners use cookies on this site to improve our service, perform analytics, personalize advertising, measure advertising performance, and remember website preferences.Ok