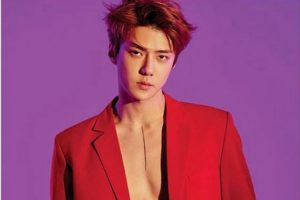 Singer Sehun has proved that he is a class act.

The member of South Korean boy band EXO has donated 20 million won (S$23,500) to his elementary school, which marked his generosity by displaying a banner about his act.

The money to the Seoul Mangu Elementary School will fund scholarships for the top graduates.

He follows in the footsteps of another two famous K-pop artists – RM, 25, and Taeyeon, 30.

END_OF_DOCUMENT_TOKEN_TO_BE_REPLACED

END_OF_DOCUMENT_TOKEN_TO_BE_REPLACED
We and our partners use cookies on this site to improve our service, perform analytics, personalize advertising, measure advertising performance, and remember website preferences.Ok