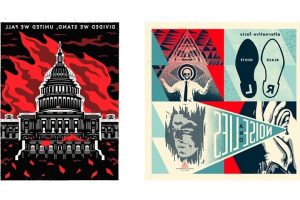 Politics has always played a central role throughout the careers of Shepard Fairey and Cleon Peterson. Despite this fact, their latest prints were shelved for some time, because the artists did not want to further stoke the flames of division after the “tumultuous post-election” incident at the US capital building on January 6.

As tensions continue to build within the American political system, the two Los Angeles-based artists decided that it is imperative they use their platform to combat what they believe to be a fundamental threat to democracy.

After watching the January 6th hearings, I called Shepard, and we talked about the testimony and how it affected us. Shepard and I have been close friends for 25 years. I mentioned that I’d always felt driven by hatred of what I saw as unjust authority. In my 20s, I felt like a social outsider, cast out and alienated from society. I didn’t have the self-knowledge to understand that I’d put myself in that position as much as anyone else. Shepard mentioned how reactionary rebellion has shifted in him too. So in the spirit of 2 friends sitting next to each other as we did years ago, we came up with the idea that this would be an excellent opportunity to present our work and thoughts jointly, sharing the dialogue we, as friends and citizens, have practiced for years. We also hope to inspire other artists to use their voices through their art and other outlets.

Each of Peterson’s new prints originally featured in The New York Times. The first, TRUTH, appeared in an op-ed prior to the 2020 election, while What Have We Lost. The Devil Made Me Do it and Divided We Stand, United We Fall were produced in response to what the artist described as a “Faustian bargain that Trump and his accomplices made in designing the coup.”

In anticipation of July 4th, Fairey is releasing a print titled Alternative Facts. Similar to Peterson, the OBEY founder shared his thoughts:

July 4th is a day to reflect on the principles that inspired American independence and what it means to be a steward of the best of those principles in the current moment. Cleon & I both want to help improve the health of the society we and all individuals comprise and depend on, not for personal gain or power, but to improve our collective quality of life. We are experiencing a pervasive mass psychosis fueled by fear and disinformation, which breeds animosity, tribalism, and skepticism about truth and facts. A psychologically handicapped society cannot function properly, much less deliver solutions for the greater good. We are at a critical moment for the preservation of democracy and non-partisan access to voting for all citizens of voting age. The forces dominating our politics do not reflect the values of most Americans. My print, Alternative Facts, addresses the mass confusion about truth that allows the parties who spread the big lie about the 2020 election (and many other lies) fomented the January 6th insurrection and are engaged in voter suppression and other anti-democracy schemes, to flourish unchecked.

Peterson’s prints are available to purchase for $150 USD each at his website. Each artwork sizes in at 18 x 24 inches, is hand-pulled and printed on 290gsm Coventry Rag paper with deckled edges. The edition number will be determined by the quantity sold.

Meanwhile, Fairey’s print can be purchased via Obey. Both artist’s work will only be available until July 4 with 100% proceeds from each sale directly benefitting ACLU.