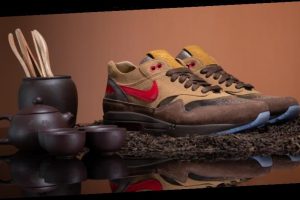 Shortly after being teased, CLOT has now released its campaign for the

Centered around a brown-paneled upper, the shoe is based on an original “K.O.D.” sample from 2006 inspired by one of the seven necessities of Chinese life, drinking tea. The revived element of CLOT history named after the transliteration of tea in Chinese serves as founders Edison Chen and Kevin Poon‘s latest effort to bridge the East and the West.

Featuring the same updated construction of the 2021 Nike Air Max 1 “Kiss of Death,” the upcoming release’s mainly “Rocky Tan” upper accented by “Sport Red” Swooshes is inspired by the tones of tea in a celebration of the art and practice of tea drinking. Elevating the shoes is a “Medium Brown” midsole paired with a translucent outsole that obscures Chinese reflexology point graphics.