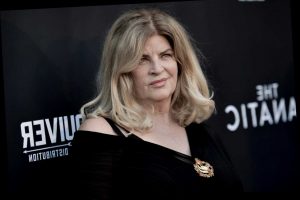 In an exchange that can best be described as “peak 2020,” CNN fired back at Kirstie Alley on Friday, after the actor criticized the network’s COVID-19 coverage.

The spat began when Alley, who is known for her conservative politics, accused CNN of fearmongering with its reporting on the coronavirus pandemic.

It seemed that the “Cheers” and “Look Who’s Talking” was ignoring the threat that COVID-19 continues to pose around the world.

On Thursday, the number of confirmed coronavirus infections in the U.S. surpassed 9 million, with several states reporting their highest tally of daily cases since the start of the pandemic.

“Kirstie, you are welcome to change the channel,” the network wrote. It then took a jab at “Veronica’s Closet,” Alley’s NBC sitcom that was canceled in 2000 after three seasons.

In March, she applauded Trump for “taking charge” when it came to COVID-19, seemingly overlooking the fact that the president had dismissed the threat and disputed science since the beginning of the pandemic. And in September, she took aim at Hollywood’s efforts to boost diversity within the Oscars, criticizing a series of planned reforms as “dictatorial” and “anti-artist.”

END_OF_DOCUMENT_TOKEN_TO_BE_REPLACED

END_OF_DOCUMENT_TOKEN_TO_BE_REPLACED
We and our partners use cookies on this site to improve our service, perform analytics, personalize advertising, measure advertising performance, and remember website preferences.Ok