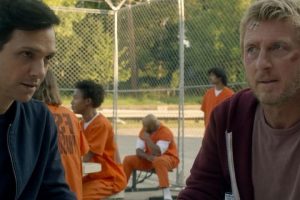 Netflix released the first teaser for season four of the Emmy-nominated comedy series Cobra Kai, revealing new legends will take the stage in the All Valley Karate Championship. The visual also confirmed that the new season will premiere this December on the streaming platform.

The trailer opens with brief footage from the first Karate Kid film, showing Daniel LaRusso and Johnny Lawrence’s inaugural fight at the All Valley Karate Championship. The visual then pivots to the upcoming season’s plot, in which Daniel and Johnny have combined their dojos — Miyagi-Do and Eagle Fang — to take down John Kreese’s Cobra Kai team at the tournament. Quick cuts showcase the top talent across all squads, building anticipation surrounding who will take home the winning crown.

Watch the trailer for season four of Cobra Kai above.