‘For the Funk of It’

Stephen Miller, the senior White House adviser, said on Sunday that the Trump administration would force a government shutdown this week if Congress refused to pass funding for a border wall. But all the late-night hosts really wanted to talk about was his hair — or what looks like his hair.

Stephen Colbert poked fun at Miller’s appearance on “Face the Nation,” in which the White House aide’s hairline looked conspicuously low, compared to past public interviews.

“There has not been a right-wing propagandist with fake hair that obvious since Joseph Goebbels tried a weave.” — STEPHEN COLBERT

Then, in a comical interview with Colbert, “Miller” (played by Peter Grosz) railed against illegal immigration as tufts of hair suddenly appeared on his head.

Eventually he ended up with a full-on Afro, telling Colbert: “The simple fact is, anyone who opposes this president is a jive turkey who lacks the funkiness to protect our borders. For Stephen, we are one nation under a groove, getting down just for the funk of it. Do you have the capacity to dig it, Stephen?”

Seth Meyers and James Corden both made fun of President Trump for misspelling the word “border” in a tweet on Monday. The president wrote: “Anytime you hear a Democrat saying that you can have good Boarder Security without a Wall, write them off as just another politician following the party line.”

“Come on — I can understand how you could misspell ‘Melania,’ but the wall is the actual love of your life!” — SETH MEYERS

“Trump is so frustrated right now, he wants to build that wall just to bang his head against it.” — JIMMY KIMMEL

Trump faces at least 17 different court cases against his administration, his businesses and himself, according to a count by Wired’s Garrett Graff, who described the situation as “a legal assault unlike anything previously seen by any president.”

Stephen Colbert, who has been eagerly tracking developments in the Russia investigation, joked that this was “quite a distinction for the president.”

“The walls are clearly closing in on Trump. And after all those cheeseburgers, the walls don’t have very far to go.” — STEPHEN COLBERT

Colbert later talked about the similarly scandal-scarred Ryan Zinke, who resigned on Saturday as secretary of the interior.

“He had so many scandals that the White House officials told him he had until the end of the year to leave or be fired. That is impressive. Getting fired for ethics violations in the Trump administration is like being fired from the Rockettes for kicking.” — STEPHEN COLBERT

“Trump’s White House is exactly like the club: You always wonder when the cops are going to shut it down, it’s full of weirdo Russians, there’s never enough women, and when the lights come on, everyone wonders why they didn’t leave sooner.” — TREVOR NOAH

“Mick Mulvaney has agreed to become Trump’s acting chief of staff, but says that he only wants to do the job for six months. You can tell working for Trump is tough because people are quitting before they even start.” — JIMMY FALLON

Who knew Santa Claus was a Trump supporter?

Cardi B did a Carpool Karaoke with James Corden, and discussed the perils of being funny.

Representative Adam Schiff, a Democrat from California and the incoming chairman of the House Intelligence Committee, is about to have a lot of say-so when it comes to investigating Trump’s dealings with Russia. He will speak to Stephen Colbert on Tuesday. 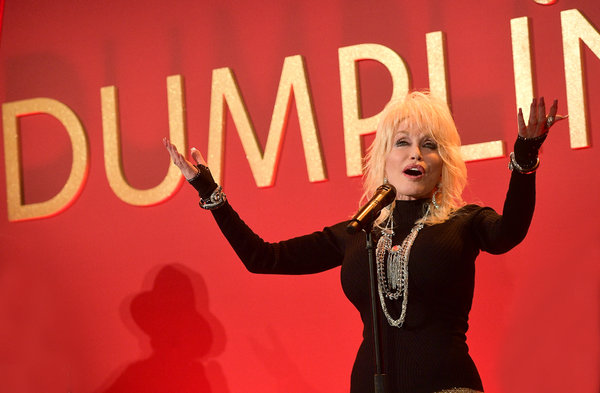 Dolly Parton nearly stole The New York Times’s Carpetbagger columnist away from us. But he’s still here, and here’s his account of how he resisted her charms.