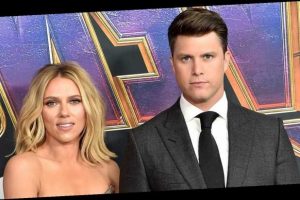 Not his idea! Colin Jost found himself in an awkward spot when he was forced to tell a joke about wife Scarlett Johansson on Saturday Night Live.

The comedian, 38, and his “Weekend Update” cohost, Michael Che, wrote jokes for each other to tell during the Saturday, December 19, episode. “We’re making each other read jokes live on air that the other person has never seen before,” the 37-year-old Daily Show alum explained of their Christmas tradition.

For the final joke of the roundup, Che tricked Jost into poking fun at Johansson, 36. “It was announced that Creed singer Scott Stapp will play Frank Sinatra in an upcoming movie, but the good news is Sammy Davis Jr. will be played by Scarlett Johansson,” the A Very Punchable Face author said, shaking his head and stifling a laugh before burying his face in his hand.

The actress has been involved in more than one casting controversy in recent years. Fans protested her role in 2017’s Ghost in the Shell due to the whitewashing of the film, which was based on a Japanese manga series. She then exited Rub & Tug in July 2018 following backlash for her casting as a transgender man.

Johansson spoke out about the ordeal in a July 2019 interview with AS IF. “You know, as an actor I should be allowed to play any person, or any tree, or any animal because that is my job and the requirements of my job,” she said at the time. “I feel like it’s a trend in my business and it needs to happen for various social reasons, yet there are times it does get uncomfortable when it affects the art because I feel art should be free of restrictions.”

The Oscar nominee later clarified her comments in a statement to Entertainment Weekly, noting that she was remarking on “the confrontation between political correctness and art” in Hollywood. “I recognize that in reality, there is a wide spread discrepancy amongst my industry that favors Caucasian, cisgendered actors and that not every actor has been given the same opportunities that I have been privileged to,” she added. “I continue to support, and always have, diversity in every industry and will continue to fight for projects where everyone is included.”

Johansson and Jost tied the knot in October after more than three years together. Ahead of the nuptials, Che quipped on The Ellen DeGeneres Show that inviting him to be in their wedding would “be a big mistake” because he “would love to go and just disrupt everything.”

END_OF_DOCUMENT_TOKEN_TO_BE_REPLACED

END_OF_DOCUMENT_TOKEN_TO_BE_REPLACED
We and our partners use cookies on this site to improve our service, perform analytics, personalize advertising, measure advertising performance, and remember website preferences.Ok