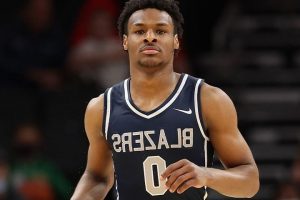 Bronny James is considered a part of the next generation of young superstars the NBA community is keeping an eye on. Since his dad and current Los Angeles Laker, LeBron James announced that he wants to, by all means necessary, play with his son in his final NBA season, the young king has had more eyes on him than ever.

Bronny is currently a senior at Sierra Canyon High School and is a four-star college recruit. Many have said that he could make it as a solid NBA player, however a recent report from Dana O’Neil of The Athletic has revealed that “most coaches and scouts” from major conferences schools have told the publication that they do not think he is NBA ready just yet. Bronny evidently has choices as a top 100 recruit, showing undeniable talent. Aside from playing college ball, Bronny has the optino to potentially joing the NBA’s G League Ignite, Overtime Elite or even play professionally overseas. He could also choose to train for a year before declaring for the 2024 NBA Draft.

While he has many options presented to him, playing college ball is definitely a real possibility. Many college scouts and coaches have told The Athletic that Bronny posesses immense talent and understanding of the game. However, while he is good enough to play for top schools, with his current suitors being Oregon, UCLA, USC, Michigan, Kentucky, Ohio State and Memphis – coaches and scouts simply do not think he is at the caliber that will take him directly to the NBA. In fact, many have said that it would take Bronny a couple of years to enter the league, even “after two or even three years.” O’Neil writes,

“Most coaches and scouts who spoke to The Athletic say Bronny might not be NBA-ready after two or even three years. He might develop into an NBA player, but the consensus is that it will take time. They say he needs reps against other high-caliber players to succeed, to fail, to adjust, to grow.

That was how Jalen Brunson (Villanova), Corey Kispert (Gonzaga), Malcolm Brogdon (Virginia), Ochai Agbaji (Kansas) and many others got to the NBA, but they question whether that pathway would sit well with Bronny and his family.”

Bronny has caught the attention of the world and has shown he is an all-rounder with the ability to do a little bit of everything on the court. Thaddeus Young previously said that Bronny was a “solid” player, “He’s solid as hell. Obviously, probably not the elite of the elite. But he’s athletic, he’s strong, he plays defense, he can shoot the ball well, he can run the point guard position, he can play off ball.”

It is certain that Bronny has immense potential, but it remains to be seen what path he chooses post-high school.

In other basketball news, Luka Doncic becomes the first player since Jordan to have at least 30 points in the first six games of the season.
Source: Read Full Article