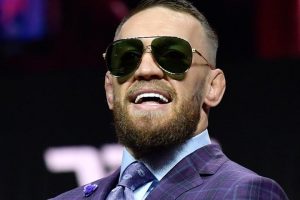 During one of his recent press appearances for UFC 264, Conor McGregor discussed the possibility of fighting Logan and Jake Paul.

After an interviewer brought up the potential of the Paul brothers being ringside at his upcoming trilogy fight with Dustin Poirier, “The Notorious” shared his thoughts on the YouTubers turned boxers. Simply saying, “I couldn’t care about them two dingbats.

Leading the interviewer to ask if he would ever compete against Logan and Jake Paul. “I don’t see so, but never say never. If they’re gonna keep competing and whatnot, who fuckin’ knows? But dingbats, the two of ‘em,” replied McGregor.