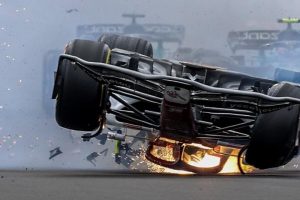 Chinese driver Zhou Guanyu praised Formula One’s halo head protection system as it saved the driver after being involved in an opening lap accident during the F1 Grand Prix of Great Britain.

Zhou’s car is seen flying upside down across the Silverstone track before being wedged between the tire and barrier and catch fencing. Mercedes driver George Russell, who collided with Zhou, instantly got out of his car during the Red Flag to check up on the Chinese driver. Russell called it “one of the scariest crashes I’ve ever seen.” Russell further added that F1 could learn from the crash, “It was horrible, in that position he was stuck there, (there was) nothing he could have done. The space between the barriers and the metal fence, and he was just stuck in there, nowhere to go. Yeah, something to learn.)

Zhou took to Twitter after his trip to the medical center, “I’m OK, all clear,” and praised the safety device for preventing him from serious injuries, “Halo saved me today. Thanks everyone for your kind messages.”

The halo was previously criticized by fans and drivers, including Lewis Hamilton and Max Verstappen, when firstly introduced in 2018. The protective gear was criticized because it obstructed the driver’s vision, was visually unappealing, and was against the concept of open-cockpit racing. However, it seems to have proved vital as it prevented an already horrific accident from becoming fatal. Ferrari’s race winner Carlos Sainz also praised the halo, claiming that there was no doubt the halo played a crucial role, “What happened with the Halo, today, they’ve saved probably two lives,” said Sainz. During an F2 race in Silverstone, Drivers Roy Nissany and Dennis Hauger collided on the opening lap as Hauger’s car was sent airborne. Incredibly, both drivers managed to escape unhurt and replays showed it was the Halo that saved the life of Nissany.

Elsewhere in sports, FIFA will be implementing a semi-automated offside system at the 2022 World Cup.
Source: Read Full Article