Converse Celebrates Its Basketball Heritage With "Beat the World" Pack 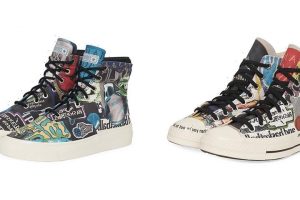 Converse‘s basketball history dates back over 100 years and its Chuck Taylor (formally known as the Non-Skid, or the All Star when it was changed in 1918) is key to Converse’s sporting success. Now, the footwear giant is celebrating its history with the new “Beat the World” pack, comprising a Chuck 70 Hi and a Skidgrip.

Both pairs have been subjected to a rework that’s unlike anything we’ve ever seen from Converse before. Its rich archives have been explored by the design team who subsequently stumbled across vintage ads, logos, yearbook photos, and more. These were cut out by hand, reassembled into a collage mash-up, scanned, and recolored in high-contrast shades of red, blue, yellow, blue, and purple, before being intersected by black-and-white scans as well.

The result is nothing short of stand-out. Converse’s Chuck 70 Hi and Skidgrip now feature a full upper collage print, which even extends to the “Egret”-hued sole unit for the Chuck. Signature design tropes such as the leather All Star badge, high foxing tape, OrthoLite insoles, vintage license plates, and the use of canvas remain.

Take a look at Converse’s “Beat the World” pack above, and pick up both pairs now from retailers such as Slam Jam.