Home » Entertainment » Could we *finally* be getting that Lena Dunham Polly Pocket live action?

Could we *finally* be getting that Lena Dunham Polly Pocket live action? 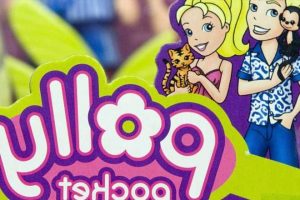 Here’s everything we know so far about Polly Pocket’s big screen treatment.

Remember back to when we brought you the news that Lena Dunham and Lily Collins were teaming up to bring Polly Pocket to life in a live action remake? Well, it’s officially underway.

In a statement announcing the project back in 2021, Collins said: “As a child who was obsessed with Polly Pocket, this is a real dream come true and I can’t wait to bring these tiny toys to the big screen.”

And indeed, in an interview with The Hollywood Reporter at a screening of her new film Catherine Called Birdy, Dunham shared thatshe is currently finishing her second draft of the script and teased early details of the plot, hinting, “we have a lot of fun with the idea of what happens when a small person encounters a big world.”

Over the past year, live action versions of our childhood faves have been all the rage. The Polly Pocket film will join fellow 90s stalwarts The Powerpuff Girls and Barbie in getting the feature length treatment. However, Dunham joked that she’s not feeling threatened by Greta Gerwig’s hotly anticipated 2023 release. “I just want that movie in the world and I want to be watching that right now. I wish we were at a screening of Barbie right now,” she said.

So what exactly do we know about the project so far?

What’s the plot of the live action Polly Pocket film?

In the early days, Dunham gave a small glimpse at the general theme saying: “I’m so thrilled to bring to bear both my love of this historic property and also my deep-seated belief that young women need smart playful films that speak to them without condescension.” At the time of the film’s announcement, it was also revealed it would follow a young girl and a pocket-sized woman who form a friendship.

Now, Dunham has opened up on a few key details, including just how small Collin’s doll will be.“Let’s just say Polly Pocket was at her best when she was the original teensy tiny ’90s size,” she mused of the character, which she described as adorable and delightful. “They made her a little bigger now, which I support, because of choking hazards. But I’m writing ’90s tiny.”

Polly Pocket might not seem like the most obvious children’s toy to canonise onto the silver screen but for many she was a doll of countless talents. She skated, she farmed, she was a chef – a true multi-hyphenate woman. If you fell under the Polly Pocket spell, you’ll know that her do-it-all attitude gives Dunham and co a lot of material to work with.

Who stars in the cast of the live action film Polly Pocket?

The film is still in pre-production and Lily Collins is currently the only cast name to be revealed. The actor is no stranger to taking a starring role, so audiences can look forward to Collins lending her sweet onscreen charm to the role of Polly Pocket.

What are people saying about the live action Polly Pocket film?

We can’t seem to get enough of nostalgic films, TV shows and podcasts. So, of course news of the upcoming film has already set social media alight with differing opinions from fans who owned Polly Pocket dolls during their 90s heyday. Read on to see what people are saying:

We’ll just have to wait patiently for the next exciting update.