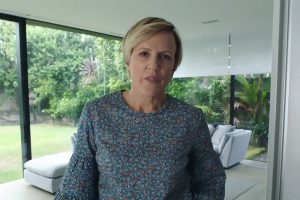 Musician Jason Kerrison – one of the famous Kiwi faces throwing their support behind the Wellington protesters – has been shut down by Hilary Barry, after he sent her an offensive tweet, calling her “smug”.

The social media exchange started after Barry wrote on Twitter: “Retweet if you’re NOT going to the anti-vax protest in Wellington. Oops I mean anti-mandate.”

Almost 3000 people retweeted the message but Kerrison, who found fame as lead singer of the band Opshop and for hits such as One Day, replied: “So smug too. Yuck, especially when you’re so influential. Scripted or muzzled? Let’s not repeat history Aunty. The truth is agnostic and relentless.”

In the tweet, he also included a black and white image of what is supposedly a mass hanging in Nuremberg, Germany – but is, in actual fact, one of Nazi war criminals being executed in Kyiv, Ukraine – with the words “since we’re now into repeating history, let’s not leave anything out”.

The journalist and broadcaster did not let Kerrison get away with it, telling him not to send “veiled death threats” to her again.

Kerrison then replied saying he was “truly sorry” that Barry had taken offence and saying “aunty” was meant in jest.

“Indeed I am truly sorry you took offense. ‘Aunty’ was meant in jest. But veiled death threats? This is my concern, doubling down on the absurd. Peace and unity for all who agree? Ps. Is it kind to mock people? Perhaps I should have simply asked that,” he wrote in his “apology”.

Twitter users were quick to point out that “sorry you took offense” is not a good apology and doubled down on Barry’s point that the image, alongside the words in his tweet constituted a “veiled death threat”.

Lizzie Marvelly intervened and asked Kerrison if he believes it is “kind” to “send photos of executions”.

“Not on reflection, absolutely not,” Kerrison replied. “I apologised for the offense I caused. I was triggered by Hilary mocking others, and reacted inappropriately.”

The TV presenter is not the only media personality who has been targeted by Kerrison on social media in the past few hours.

The musician also told journalist Russell Brown to “repent” in a tweet that included the same shocking image of a mass execution.

The award-winning singer has been vocal about his views on Twitter regarding vaccines and the pandemic.

Earlier this month he shared news stories about Denmark ending all Covid-19 restrictions and vaccines being considered for children under 5 in the US.