Cow Parade Returns to N.Y.C., but Please Don’t Steal Them This Time 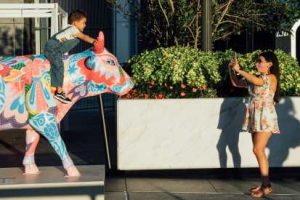 The cows are back.

Twenty-one years ago, about 500 fiberglass cows — decorated by artists, celebrities and schoolchildren — were placed across New York City. The vibrantly colorful cows grazed in parks and on sidewalks, where tourists snapped photos, children clamored to climb up on them and vandals plotted attention-getting heists.

Now, though, the cows are less like a wild herd drumming up chaos across the five boroughs and more like an elite pack of pampered show cows being trotted out at the county fair.

Last week, 78 fiberglass cows were settled in eight locations in the city, mostly where they can be watched by security guards or cameras. At Hudson Yards, 22 cows stand inside and outside the luxury shopping mall, posing under the escalators or looking out a glass balcony toward Kate Spade and Coach (where handbags made of their skin can fetch hundreds of dollars).

The company in charge of the public art exhibition, CowParade, did not want a repeat of the events of 2000, when cows were defaced with graffiti, had their ears cut off or disappeared from their podiums (in one case, two young men were loading a painted cow into their Jeep on West Houston Street when the police arrived).

“That event was one hell of a learning experience for us,” said Jerome Elbaum, the founder of CowParade, who is now 81. “We were very naïve in those days.”

In 1998, Elbaum was a lawyer living in West Hartford, Conn., with no involvement in the art world, when he stumbled upon a couple of fiberglass cows at a hotel on a business trip to Zurich. Elbaum was enamored with the cows, and so was a Chicago businessman he knew, Peter Hanig, who was eager to bring the idea back to his city.

Elbaum helped bring the concept to the Midwest, and he started to hear from people in New York who wanted their own herd. The idea had the enthusiastic support of the mayor, Rudy Giuliani, who held a public event alongside a cow painted to look like a yellow cab. The project attracted a slew of corporate sponsors (including The New York Times) and, at auction time, a parade of eager buyers whose money would go to charities.

The first cow exhibition in New York was both a tourism success and a series of misadventures.

The first 50 cows were shipped from Switzerland to New York to be painted by public school students, but when a piece of the fiberglass was broken off one of the cows and exposed to flame as a test, black soot came off and “flashed and was gone in an instant,” The Times reported. The cows were sent back and Elbaum found a new supplier, a business in California that made mannequins for department stores.

There were inevitable questions about how radical the artists could be in their designs. People for the Ethical Treatment of Animals, which had a cow of its own, sued the Giuliani administration and CowParade, objecting to the rejection of its initial design: a butcher-shop cow covered in anti-meat-eating slogans. (The animal rights organization ultimately lost in court.) And a design by the filmmaker David Lynch, which would have had a cow with its head chopped off and forks and knives stuck in its back, was rejected by the city and organizers as “gruesome.”

“I was surprised David Lynch did this,” Henry J. Stern, the city’s parks commissioner, said at the time. “I thought it was Charles Manson.”

Another problem with New York’s cow parade, Elbaum said, was that some of the cows weren’t, well, good.

“Critics really questioned whether this was really art because so much of it was very amateurish,” he said.

For this exhibition, which was postponed a year because of the pandemic, the idea was to focus on fewer cows and better art. Instead of an open call for designs, this year’s beneficiary of the cow auction, God’s Love We Deliver, which cooks and delivers medically tailored meals for people with serious illness, selected the artists.

There’s a cow covered in splashes of colorful brushstrokes by a local abstract painter; a cow with Frida Kahlo’s face stretched across the body; a cow by an Ecuador-born graffiti artist who painted New York subway cars in the 1980s; a cow covered in light bulbs called “Edison Cow”; and a cow with fluorescent green and blue bangs made from polylactic-acid plastic, which is derived from renewable resources.

“The art, without exception, is the best we have ever produced,” Elbaum said.

Then there are the cows that were clearly designed to be ads, like the one covered in red five-pointed stars at Macy’s on 34th Street and the shimmering silver cow sponsored by Baccarat, the crystal brand.

There will be little chance of cow-tipping this time around. The cows were intentionally placed in high-visibility locations where they can be watched over, said Ron Fox, vice president of CowParade and Elbaum’s son-in-law. Each borough has at least one herd: at Hudson Yards in Manhattan, Industry City in Brooklyn, Bronx Community College in the Bronx, New York Hall of Science in Queens and the National Lighthouse Museum on Staten Island.

Another change for this year: The auction will be held entirely online during the month of September. In 2000, the auction garnered $1.35 million for six charities, including God’s Love, at a gala at Cipriani 42nd Street, where Oprah Winfrey spent more than $100,000 on three cows.

Despite the exhibition’s refined tastes and selective approach, the sculptures have still become a playground for children and a curiosity for New Yorkers.

Outside the Hudson Yards mall last week, a Boxer puppy named Louie barked quizzically at four cows on the sidewalk (“He does this on every walk,” Louie’s owner said). Inside the mall, a young girl was lifted onto the cherry-red saddle of a cow designed (by Neil Patrick Harris) to look like a merry-go-round horse, its hooves bolted onto a concrete pedestal.

Julie Ramnarais, a Bronx resident showing her visiting family around New York, looked at that one curiously and asked, “Why cows?” As a Hindu from India, she said, she was more accustomed to seeing art of the animal there, where cows are considered sacred — not in the United States, where beef is ravenously consumed.

As Elbaum explains it, the cow is universally adored, no matter what country you’re in. Over the last couple of decades, as the cow exhibition has traveled across the globe — to France, Japan, Brazil and Mexico, among others — the cow always carries meaning, he said.

“Oh,” Ramnarais said. “I thought it would be deeper than that.”