Home » Entertainment » 'Crash Bandicoot 4: It's About Time' Finally Gets a PC Release Date

'Crash Bandicoot 4: It's About Time' Finally Gets a PC Release Date 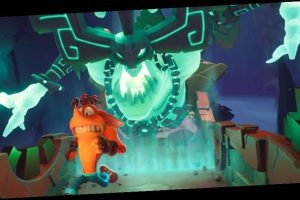 After releasing for the Xbox Series X/S, PlayStation 5 and Nintendo Switch just earlier last week, Activision has finally announced the release date for the PC version of Crash Bandicoot 4: It’s About Time.

Revealed at the end of the next-gen release trailer, the beloved platformer will be arriving on PC on March 26. Priced slightly cheaper than the PS5 and Xbox Series X/S versions (which currently go for $60 USD), the computer version will be available on Activision Blizzard’s Battle.net store for $40 USD, just like the Switch.

The eighth installment of the Crash Bandicoot franchise, the latest title follows the titular character and his sister Coco as they try to recover the mystical Quantum Masks in order to stop Doctor Nefarious Tropy and Doctor Neo Cortex from taking over the multiverse. Aiding this quest is their former enemy Dingodile, along with an alternate-dimension version of Crash Bandicoot’s old girlfriend Tawna.