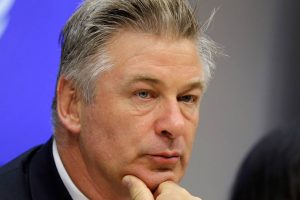 Crew members on the set of Alec Baldwin’s movie Rust reportedly used guns with live ammunition and engaged in a pastime called “plinking” hours before Halyna Hutchins was killed.

Sharon Waxman, founder and CEO of The Wrap, told CNN that one of those guns was later handed to Baldwin, who fired the shot that killed Hutchins, 42, and injured director Joel Souza, citing information from an individual with knowledge of the set.

“There’s this pastime that crew members sometimes do, it’s called ‘plinking’, and they go out into the rural areas and they shoot at beer cans. This is with live ammunition. We learned that this happened the morning of the day that Halyna Hutchins was killed,” Waxman said.

Waxman told CNN that “plinking” is common when there’s downtime during a shoot.

When asked by The Wrap for comment, Rust producers referred back to their previous statement sent to media outlets.

“The safety of our cast and crew is the top priority of Rust Productions and everyone associated with the company. Though we were not made aware of any official complaints concerning weapon or prop safety on set, we will be conducting an internal review of our procedures while production is shut down. We will continue to co-operate with the Santa Fe authorities in their investigation and offer mental health services to the cast and crew during this tragic time,” the statement said.

Hutchins was killed on Thursday in Santa Fe, New Mexico.

Souza, who was injured in the shoulder, told investigators the prop gun went off as Baldwin was practising drawing his gun, according to an affidavit for a search warrant.

According to Souza, Baldwin was “sitting in a pew in a church building setting, and he was practising a cross draw”.

A cross draw is when a shooter pulls the weapon from a holster on the opposite side of the body from the draw hand.

Souza said he was looking over Hutchins’ shoulder when he heard “what sounded like a whip and then loud pop”.

Souza said three people had been handling the firearms for scenes – they were checked by the armourer and first assistant director and then given to the actor using them.

No charges have been filed.

There were at least two accidental prop gun discharges on the Rust set in the days before the fatal shooting, according to multiple news reports.

The discharges occurred on October 16, when crew members accidentally fired two rounds after being told the gun was “cold,” the Los Angeles Times reported, citing two crew members who reportedly witnessed the incident. It was not known whether the discharges included live rounds. No one was injured in the accidental discharges, The Wall Street Journal reported.