Daniel Ricciardo Hopes to Drive McLaren Back to Its Winning Ways 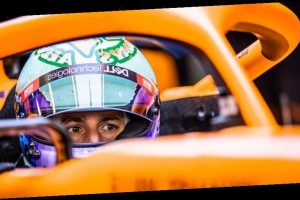 With a decade of racing at the highest level under his belt, Australian Formula 1 driver Daniel Ricciardo has always found success wherever he was, whether it was his early days in Toro Rosso, his maturation during Red Bull or his tattoo bet-winning run at Renault. Now, the driver is moving onto his next chapter at McLaren, a brand he’s been a fan of not only for its Formula 1 team but also its production cars, cheekily recalling how he had to hide his first McLaren road car purchase from his Red Bull colleagues.

For Ricciardo, it’s definitely an exciting time, but the same can be said for McLaren as a team. Finishing third in the Constructors’ Championship last year after clinching the position from Racing Point (now Aston Martin), the team has picked up significant momentum that’s only gaining force this season with the swap to a Mercedes power unit, a marvelous creation that has dominated the grid ever since the hybrid era. With the addition of a new, top-tier driver and the introduction of a proven, race-winning engine, there’s much for McLaren fans to be optimistic about for the 2021 season.

Joining us at HYPEBEAST to share his excitement for the team, Ricciardo speaks with us about his first months at McLaren, the learning curve he’ll face, his relationship with fellow driver Lando Norris and what fans can expect to see this coming season.

First of all, big congratulations on your move to McLaren. It’s definitely a very exciting time no doubt for you, your fans and those who follow the Woking team. How do you feel about the move, and how have the first months been with the team?

It’s been awesome. Obviously I grew up a fan of Formula 1 and McLaren has such a presence in the sport, and it has for so long, I was always very familiar with the F1 team and always had a bit of admiration for it, so to be here is pretty surreal. Also their automotive side — the road cars they produce — let’s just say I’m a big fan, so I’m legit just a fan of the brand first and foremost. The organization they’ve got here though, and the whole structure they’ve got in place for the Formula 1 team now is really good. It’s been an awesome few months, and obviously we’ve had no races yet, but the introduction has been really good.1 of 2 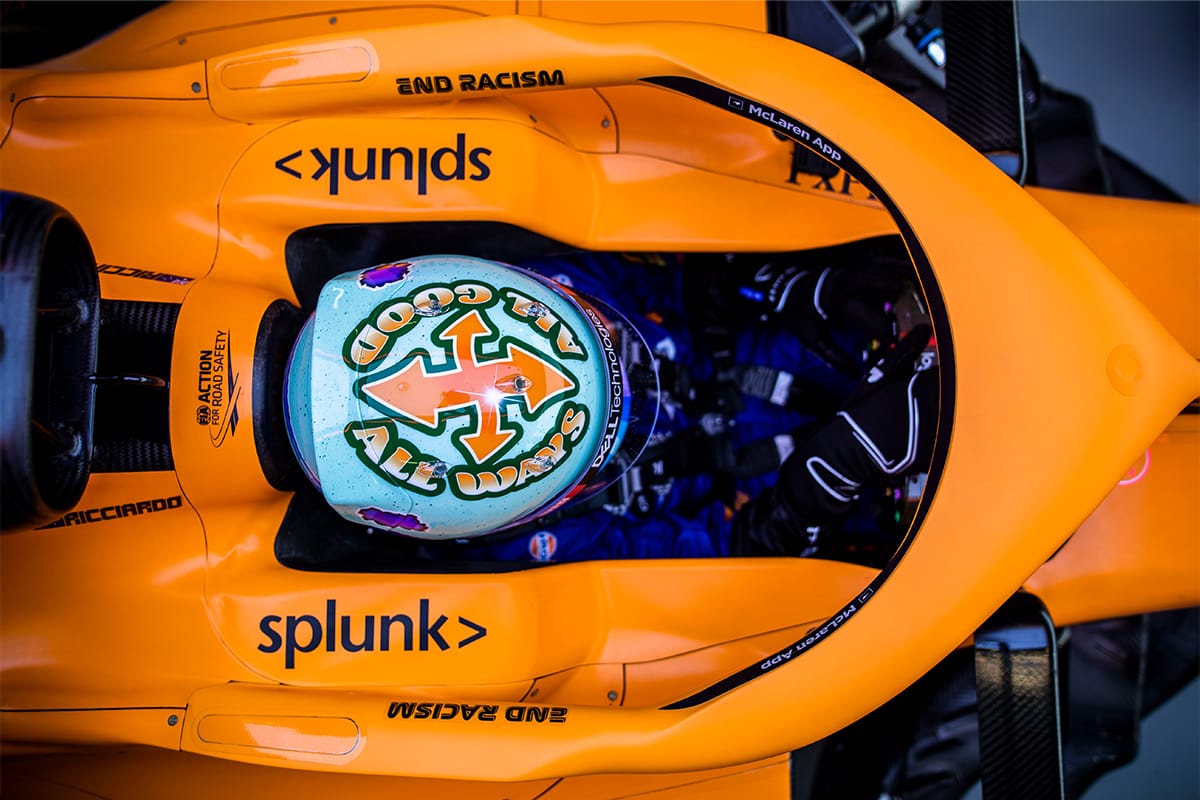 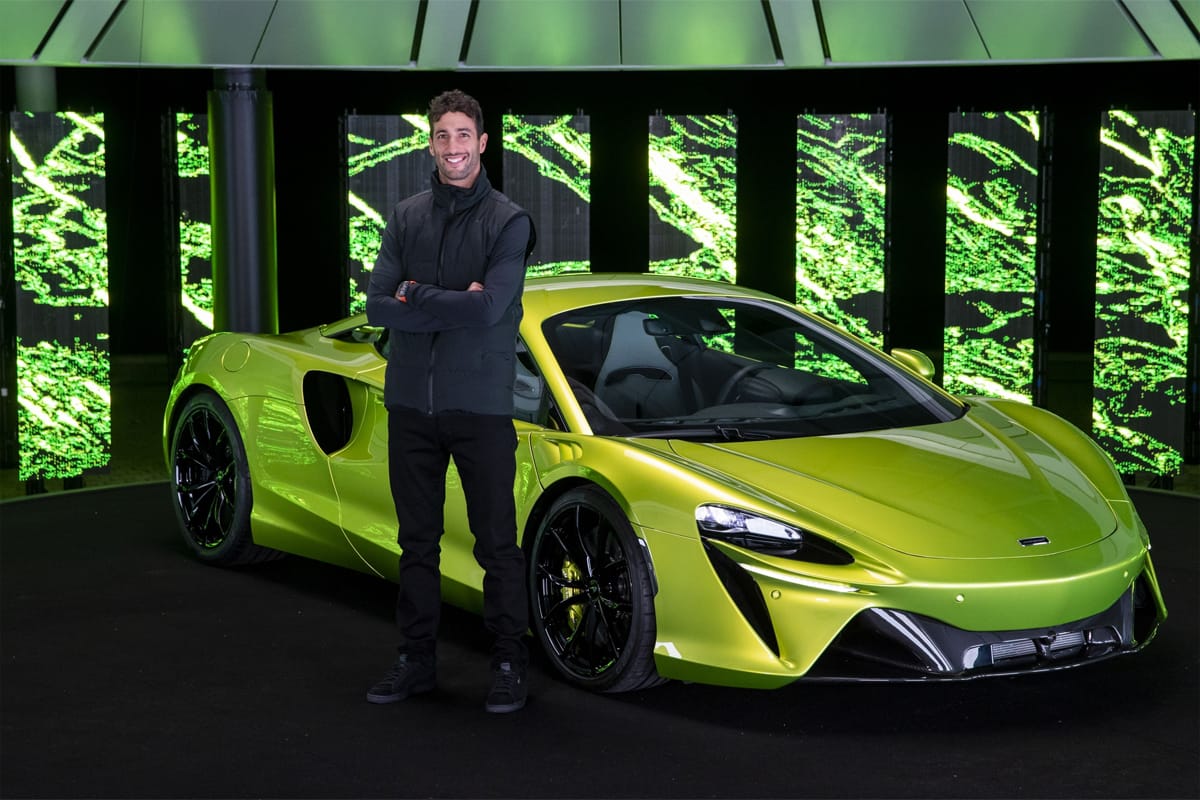 You’re now in your 11th year in Formula 1, and you’ve had a pretty good season with Renault last year, taking two podium finishes home. It seems like you were really starting to get to know the car. How does it feel to now get into a completely different car?

It’s always another challenge to move teams and try to relearn a little bit again. Inevitably, you get comfortable with a car the more and more laps you do, and I certainly started to gel with the Renault a lot more last year than year one. But looking ahead and thinking more long-term, once I devote more time to the McLaren and get to know it, I feel like I can achieve more. I’m very experienced now, but there will still be a little bit of a learning process for the first few times on track. We’ve got three days of testing coming up and I’m going to extract all I can to get there, and hopefully now after 10 or 11 years my experience can help me out. We have the first race in two weeks, and the plan is to really hit the ground running and come out with good results and no excuses.

Speaking of the car, obviously 2022 regulation changes mean teams have been quite restricted in what they could modify, but the highlight of McLaren’s 2021 car has predominantly been the swap to a Mercedes power unit. What can fans expect from the new engine?

Yeah, that’s really exciting for the team and myself. Since the sport went hybrid and to the V6 engines in 2014, Mercedes has won every championship. They’ve really dominated this era, so for McLaren, which has this forward momentum after finishing third in the constructors’ last year, to now use all that momentum and have Mercedes in the back, it’s quite an exciting time for the team. For me as well — I’ve never actually driven with a Mercedes engine so it’s another new experience for me. I’ll again try to absorb as much as I can through this and learn from them, and try and help myself and the team achieve more success, drink more champagne and all the good stuff. But for McLaren fans, they’re so excited right now. You can see the engagement the team has been getting, and I’d like to think that maybe some of it is because of me, but just where the team is at the moment, everyone is pretty excited!

Turning to your relationship with the new team, there’s been a lot of hype around the new McLaren pairing of you and Lando Norris. Both of you have gained pretty playful reputations over the years, but you’ve said in previous interviews that you’re coming to McLaren for serious business and that “it’s not going to be a comedy show.” How’s your relationship with Lando coming along so far? Will there be a strong rivalry between the two of you?

I think there definitely will be a good competitive rivalry. There’s certainly some similarities between us. We love our jobs, and I guess we’re not afraid to show it, and I think that’s strong and important, but for the fans — particularly of McLaren — if I can make people laugh and enjoy watching me that’s all well and good, but first and foremost I want to be here to get the results and I want to try push this team to the next step. I think that was really my desire but also kind of the messaging as well: I’m certainly not joining the team to be this TV special, myself and Lando. I think we will have a really good time doing what we do, but let’s put the work first and if things are going well, we’ll enjoy it and it’ll be a win win. 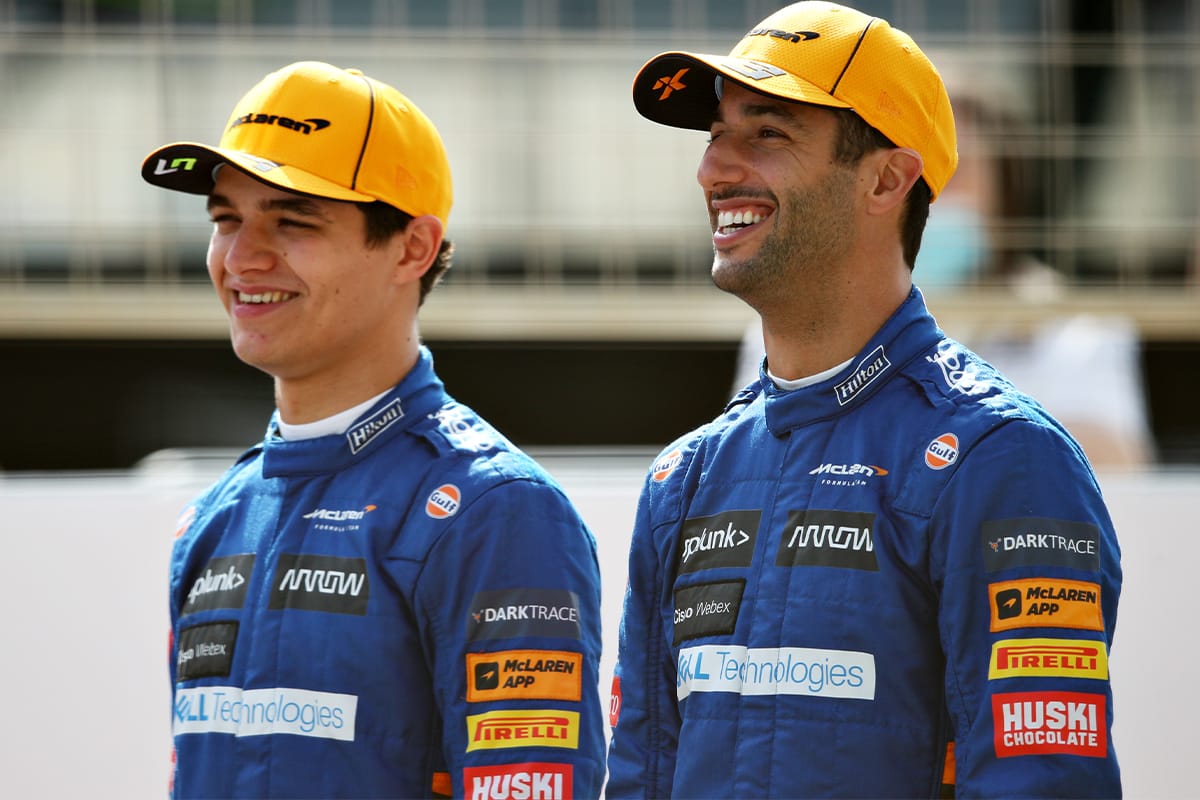 Looking forward to the upcoming season, we know it’s going to be incredibly intense with 23 races scheduled — more than any other season before. How do you think this will affect the team’s performance, and is it a sustainable model for Formula 1 in the years to come?

It’s a good question, I mean as a competitor, obviously I love race day. Sundays are definitely my favorite day of the week, so when I think of more races, I tend to get excited at the idea of it and the reality of it with this year having the most ever. But then I guess it’s like everything, there’s that balance and that fine line of what is — as you say — sustainable, and what everyone in Formula 1 can endure as well. I think we want to get to a place where we’re all loving it but also not resenting it because everyone’s completely worn down and tired from traveling the world relentlessly, jetlagged, and missing their wives or kids or husbands.

That’s where the balance needs to be. Us drivers, for example, will probably arrive on a Wednesday for a race, but a lot of the mechanics and other personnel will arrive on a Monday and then they’re leaving the following Monday, and if you’ve got three races in a row, they’re not really getting home for those three weeks. They’re working pretty long and relentless days, so yeah it’s tough to get that balance of what’s enough and what’s too much.

For me personally I’d love to obviously do as many races as possible and maybe cut down on some of the other things, because we have a lot of other commitments and marketing stuff, but I think 23 — we’re getting close to the limit now. Let’s see how it goes. I’m excited about it but maybe by the end of the year I’ll be worn out and all I’ll want to do is go lay on a beach for a month and absolutely do nothing.

I’ll also just add, I think with a lot of sports, you might get some that do 40 or 50 games in a calendar year, but a lot of that is just domestic, whereas we are going literally from one end of the globe to the other. Obviously fans understand our schedule and calendar, but dealing with jetlag, time zones, even just time spent in a pressurized cabin on an aircraft, it certainly weighs on you after a while.1 of 2 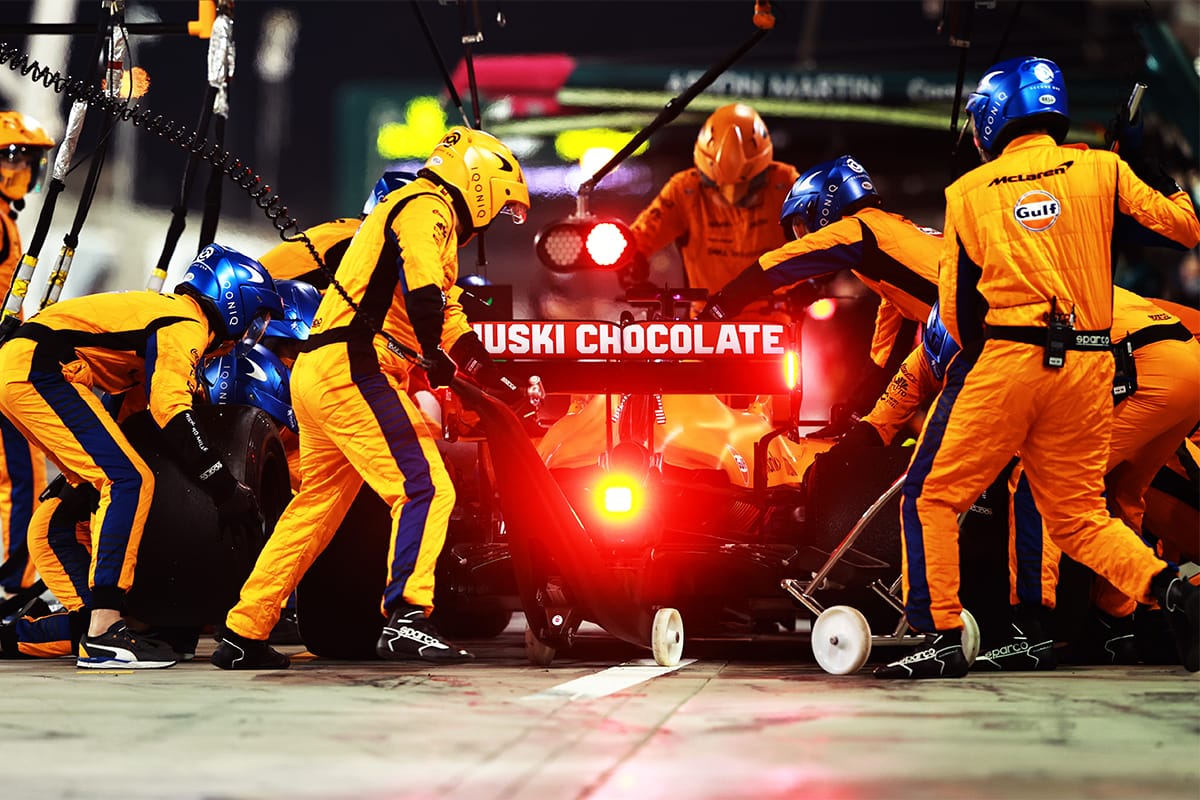 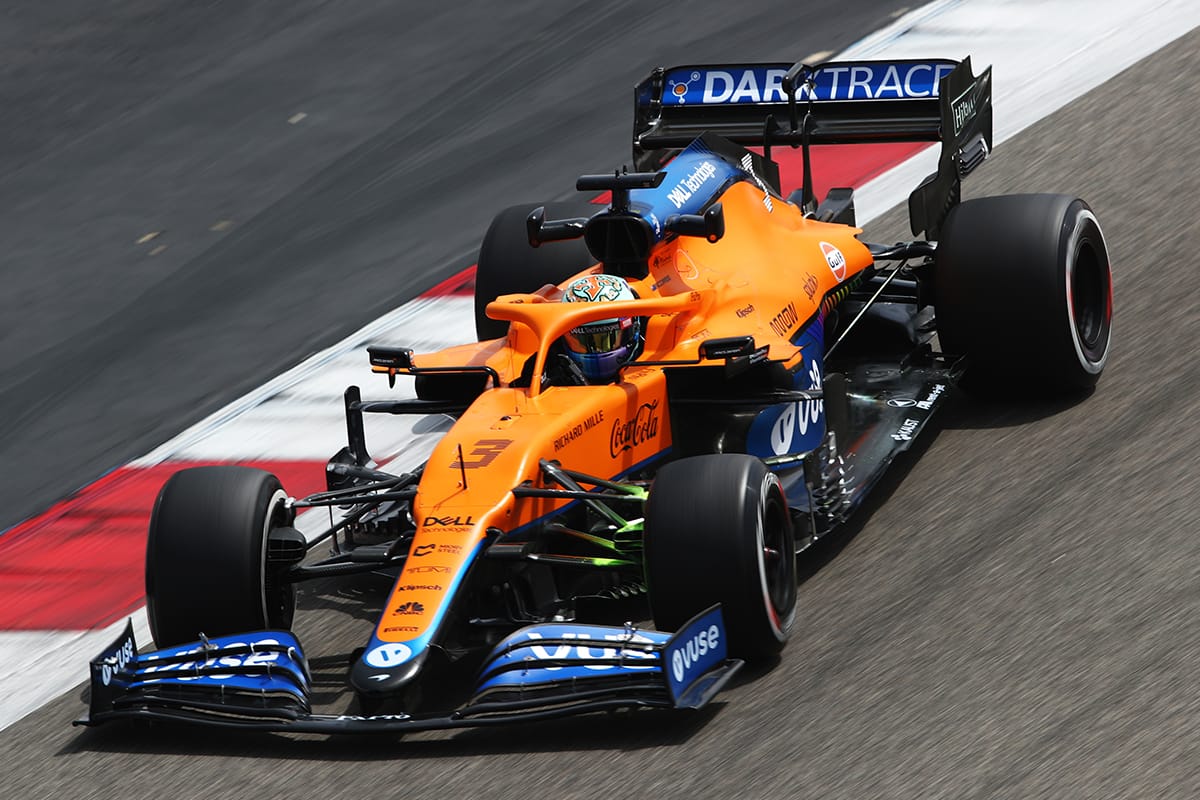 Unfortunately with the coronavirus still plaguing the globe, we’ve once again had to postpone the Australian Grand Prix opener, which would’ve been your debut for McLaren. Has the announcement been disappointing for you?

Yeah, last year it was pretty painful to be there in Melbourne and be so close but then it got cancelled. This year, it was a little bit sad again to know that we weren’t going in March, but in saying that, it still would’ve been pretty up in the air, so if postponing it to November means that we’ve got a chance of getting it done properly and with the potential upside of having fans, then I’m more than happy to wait. I’m more than happy to wait and do it properly than rush it and not execute it as well as we could. November’s summer time too so it’s a good time in Australia, it’ll be a fun time so I’m not mad!

Bahrain is now just a few weeks away, and I’m sure the team has been hard at work preparing for it. How excited are you for your McLaren debut there? Will we see another shoey?

A shoey on a team debut would be pretty much an ideal scenario to say the least, but the thing is, with that you set the bar so high from day one, it’s like, where do you go from there? But of course, I’m not going to hold back. If it’s going well, absolutely! I think it’s another kind of chapter in my career, but I don’t want to go “Oh it’s just another chapter.” I want this to really be something with purpose and strong intent, and that’s why I’m putting a lot of pressure on myself to make this [winter testing] as productive as it can be, so that when we come back here [in Bahrain] in two weeks for the first race, it’s go time and I’m feeling like I’m ready to get in there, go to business and leave nothing on the table. That’s really where my head’s at.