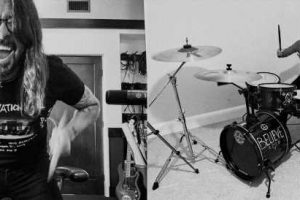 The Foo Fighters leader and the English prodigy struck up a competitive friendship on social media that has brought them, and thousands of music fans, immense joy.

You didn’t need to know every note of Nirvana’s angst-rock classic “In Bloom” to marvel at the spectacle of a little girl drumming along to the song in perfect synchronization last November, her face scrawled over with joy and passion.

The internet is an open playing field for regular people performing impressive feats, and over a couple of years, Nandi Bushell, a resident of Ipswich, England, had attracted a solid audience by expressively covering famous songs by a genre-diverse range of artists including the White Stripes, Billie Eilish and Anderson .Paak. Sometimes her father, John, and brother, Thomas, accompanied her, but Bushell was the star, combining technical virtuosity with bright-eyed showmanship (and some enthusiastic yelling).

The sight of Bushell wailing away immediately impressed Dave Grohl, the Foo Fighters frontman and former Nirvana drummer who played “In Bloom” on the band’s 1991 breakthrough album, “Nevermind.” Grohl is not a social media user, and he only learned about the viral clip when the album’s producer, Butch Vig, sent it to him.

“I watched it in amazement, not only because she was nailing all of the parts, but the way that she would scream when she did her drum rolls,” Grohl said in a recent video interview. “There’s something about seeing the joy and energy of a kid in love with an instrument. She just seemed like a force of nature.”

That said, he experienced it like any piece of content — you watch it, you enjoy it, you pass it on and then move on. But toward the end of the summer, another one of Bushell’s videos made its way to Grohl via a flood of texts from friends around the world. This time, Bushell had prefaced her cover of the 1997 Foo Fighters song “Everlong” with a direct challenge to a drum-off. The rules of a drum-off aren’t formally sanctioned by any governing body, but Bushell’s exhilarated facial expressions and mastery of the song’s breakneck pace meant Grohl was in for a battle, should he choose to accept.

In a separate video interview, Bushell offered a very simple reason for why she decided to call out Grohl: “He’s a drummer, ’cause he drummed in quite a few bands, so why not?” Bushell is 10 years old, and the clarity of her logic — her favorite word might be “epic” — was blessedly refreshing. Grohl is her favorite drummer, and when asked why, she answered, “He thrashes the kit really hard, which I like.”

At the same time, Grohl is also a married father of three gearing up to release Foo Fighters’ 10th studio album, “Medicine at Midnight,” in February, which corresponds with the band’s 25th anniversary. “The one thing we hadn’t really ever done was a danceable party record, and those two things used in the same sentence as the Foo Fighters could be really terrifying,” he said, before citing dance albums by rock artists, such as David Bowie’s “Let’s Dance” and the Rolling Stones’ “Tattoo You.”

Despite his full docket, and after enough peer pressure, Grohl rose to the challenge with a performance of “Dead End Friends” by Them Crooked Vultures, one of those many bands he’s played in over the years. “At first I thought, ‘I’m not going to hit her with something too complicated, because I want this to be fun,’” he said. “I’m not a technical drummer; I am a backyard keg-party, garage jam-band drummer, and that’s the way it is.”

Nonetheless, Bushell volleyed back another astute and overjoyed performance in two days. Grohl conceded defeat, and since then the two have continued playing music for each other. He recorded an original song about Bushell (sample lyric: “She got the power/She got the soul/Gonna save the world with her rock ’n’ roll”); Bushell returned the favor with her own song, “Rock and Grohl.” Cumulatively, the videos have attracted millions of views across YouTube and Twitter, making it a truly rare uncomplicated feel-good story from the last few months.

Part of the appeal is the way their bond transcends generation and geography. Grohl has been musically active since the 1980s, whereas Bushell started drumming when she was 5, in 2015. There’s also something fundamentally charming about a 51-year-old white, male, longtime Angeleno bonding with a 10-year-old multiracial Brit through the power of social media, over a style of music that supposedly matters less than ever.

Rock ’n’ roll is commonly considered to be in cultural decline — in a 2014 review of the Foo Fighters album “Sonic Highways,” The New York Times pop music critic Ben Ratliff declared, “Rock doesn’t lead the discourse anymore.” That diagnosis has grown only more pronounced in more recent years as genres more suited to streaming have flourished, and yet here’s video proof that rock’s elemental pleasures haven’t fully lost their allure among a younger set.

Of course, the pair’s virtual friendship has also taken off during the coronavirus pandemic, which has nearly unilaterally shut down live music around the world and deeply winnowed creative opportunities for working musicians. In a normal year, Foo Fighters would be on tour, and Bushell would still be attending the weekly jam nights around Ipswich, where she honed her skills by playing with adult musicians. Instead they, as well as millions more musicians and music fans, are largely confined to their home and immediate social sphere.

For Grohl, the challenge helped reorient his priorities during this bizarre year. “What I realized was more than any sort of technical contest, this was something that was bringing people a lot of joy at a time where everyone could use a little bit,” he said, adding, “it actually changed the way I look at what my band does in this time.”

Since the challenge began, Foo Fighters have recorded stripped-down live sets and comical fake commercials, all with the goal of maintaining their connection to their audience. “If that’s going to bring people five, 15, 20 minutes of happiness in one day, then that’s what we should be doing,” he said.

Bushell’s father, John, expressed a similar sentiment: “It’s a wonderful experience and our hearts, as parents, are lifted just as much as the people who are watching the videos.”

Toward the end of the interview with Grohl, Bushell joined the video call to finally meet her hero. “I feel like I’m meeting a Beatle,” Grohl said when her face popped onto the screen. (Another coincidence: Both drummers were first attracted to the instrument after listening to the actual Beatles.) The two had never interacted directly before, and as you might expect, Bushell was a little star-struck. But Grohl is regarded as one of the friendliest people in music, and before long, she was showing him around her home, with appearances from the whole family.

Eventually they made plans to write a song together (a fast-tempo one, per Bushell’s request) and play onstage whenever Foo Fighters are allowed to tour in Britain. “But it has to be at the end of the set because you’re going to steal the show,” he said.

As for the next step of the challenge, the ball is in Grohl’s court. “I had an idea for how to respond to your last song, but I haven’t done it yet,” he said. “It’s a big project. I don’t want to give it away, but it’s a good one.”

END_OF_DOCUMENT_TOKEN_TO_BE_REPLACED

END_OF_DOCUMENT_TOKEN_TO_BE_REPLACED
We and our partners use cookies on this site to improve our service, perform analytics, personalize advertising, measure advertising performance, and remember website preferences.Ok