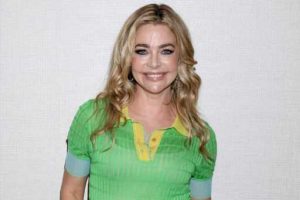 Well, this wasn’t a turn of events we weren’t expecting after Denise Richards and Charlie Sheen’s daughter Sami, 18, joined OnlyFans. Just days after the 18-year-old started her account on the adult-content website, mom created her own page… because why not?

The 51-year-old actress announced the news in an Instagram video of her slowly walking into the ocean in a flowing white dress with her spaghetti straps falling off her shoulders while Len’s single, “Steal My Sunshine” played in the background. While Sami is charging $19.99 a month, Richards went a bit higher with exclusive content for $25 a month. She captioned her video, “Ready…here we go #onlyfans.” Having posed for Playboy in the past and filmed a provocative nude scene in the movie, Wild Things, this certainly isn’t new territory for Richards.

The former Real Housewives of Beverly Hills star was supportive of her oldest daughter’s decision, telling Page Six, “Sami is 18, and this decision wasn’t based on whose house she lives in. All I can do as a parent is guide her and trust her judgment, but she makes her own choices.” Her response seemed downright nonchalant, especially when the site is known for NSFW content — but maybe Richards knew all along that her account was coming next.

Of course, dad isn’t too pleased with this situation, and made sure to note to Page Six that Sami is “living with her mother.” Charlie added, “This did not occur under my roof.” Sami had moved out of Richards’ house and into Charlie’s house after they became estranged. It appears the mother-daughter duo reconciled early in the spring after Richards lovingly acknowledged Sami’s 18th birthday. Dad did offer a bit of advice to his daughter, though, “I do not condone this, but since I’m unable to prevent it, I urged her to keep it classy, creative, and not sacrifice her integrity.” It feels like this family saga will probably have another chapter or two before it concludes.

Before you go, click here to see all the celebrity women who have posed for Playboy.