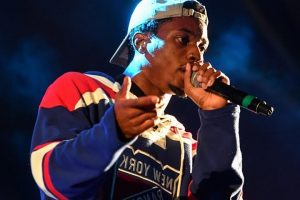 Denzel Curry provides listeners with some hard-learned advice on his new single, “The Game,” out today.

Chronicling his escape from the streets and rise to critical acclaim, the song tells fans to work hard and avoid surrounding themselves with people who will bring them down. “I know you want to get this money,” raps Curry. “You gotta be smart first.”

The track is the rapper’s first solo release of the year, and while Curry’s sixth studio album, Melt My Eyez, See Your Future, is in the works, the song comes off of the Madden NFL 22 soundtrack and debuted with video that shows a pixelated, 80s-style rendering of the game. Curry also had a song with Yungblud called “LEMONADE” on last year’s installment of the game.

Answering questions from fans on Twitter, Curry wrote that “the sound of the album is different than all my other albums” and features a mix of producers he’s worked with since his first release, as well as those he’s always wanted to work with.

Earlier this year, the artist dropped a remixed version of his 8-song collaboration with Kenny Beats titled Unlocked 1.5, with every song on the project updated with guest appearances, including Joey Bada$$, Arlo Parks, Smino, Robert Glasper, Benny The Butcher and more.