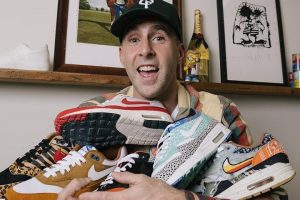 When you think of Southern sneaker culture, Derek Curry — the founder of boutique chain Sneaker Politics — is leading the charge. Today, Politics has storefronts in Lafayette, New Orleans, Baton Rouge, Dallas and Austin, but the road to building this empire required the Louisiana native to jump through multiple hoops and bet on himself time and time again. It took giving up his aspirations of landing a career on Wall Street, enduring overseas deployment in Iraq as a member of the US Army and even working as a manager at Finish Line. But despite all of the hardships, he’s clung onto his fiery passion for kicks, and it’s helped him transition from having stockbroker dreams to building stockroom teams.

Curry’s collection is loaded with a buffet of brands and silhouettes, but the one model that he holds closest to his heart is the

Who or what got you into sneakers?

My peers in school and sports. Through middle school and high school, I remember always circling through athlete signatures. I was really inspired by Nike’s advertising, and recall that the first shoes that really mattered to me were Bo Jackson’s Nike Air Trainer 91. From there I dove into Chris Webber, Deion Sanders and Michael Jordan’s kicks.

What was sneaker culture like growing up in Louisiana?

I grew up in a small town that was 30 minutes outside of Lafayette, Louisiana and there was definitely a sneaker community there. They would go to Lafayette on any given Tuesday to pick up the newest pair of Jordans and rock them to school. Those moments were considered major flexes. You’d be good for the rest of the school year. I looked up to the older kids at the time that would have all of the latest kicks and would wish that was going to be me one day.

Since you were from a smaller town and didn’t have access to boutiques like we do nowadays, where were you copping sneakers?

You’d catch me standing in line at department stores like Sears and JCPenney. Back then there weren’t any crazy campouts. At most, there would be around five people standing in line to get a shoe and you can pretty much find Jordan releases stocked on the shelves days after they would release. However, it was important that you had them first. I’ve got to give props to my mother, who would sometimes take time to drive me to the mall in the morning before school started to pick up a pair of shoes so that I could rock them that day. That was one of the greatest feelings in the world.

You chose to highlight the Nike Air Max 1 for this feature. Do you remember the first time you laid eyes on the silhouette and what your reaction was?

I can’t think of the first time I ever saw the Air Max 1, but I do recall when it became a big part of my life. After I got out of the army, I came back to Lafayette and started working at Finish Line — and the store was big on marketing Nike running shoes. I distinctly remember being fascinated with the EKINS coming in and educating us on the upcoming “History of Air” Pack. I loved the story so much that I grabbed a pair and wore them the next day. I always say that it’s my favorite shoe because it’s been the most consistent in my rotation over the years.

What are your favorite Air Max 1 colorways and why?

I love that the silhouette has so many good colorways. You can go simple and rock the OGs or go with something on the crazier side like atmos’ “Animal Pack” colorway. My personal favorites would have to be the “History of Air” colorway and the “Evolution of Icons” pair. This year, I loved what Deon Point did with his Concepts collaboration. The whole Woodstock music festival inspiration and mixture of patterns was so good.

Do any fond stories come to mind when you think about the Air Max 1?

When I was working at Finish Line as a manager, I remember that we had the power to check the inventory of any store and call them up to request specific colorways to be transferred. I was always sifting through the systems to see what was out there and one time I found the Air Max 1 “Crepe” colorway for $19.99 USD at a store in San Antonio and lied that a customer was in need of them even though they were really for me.1 of 2 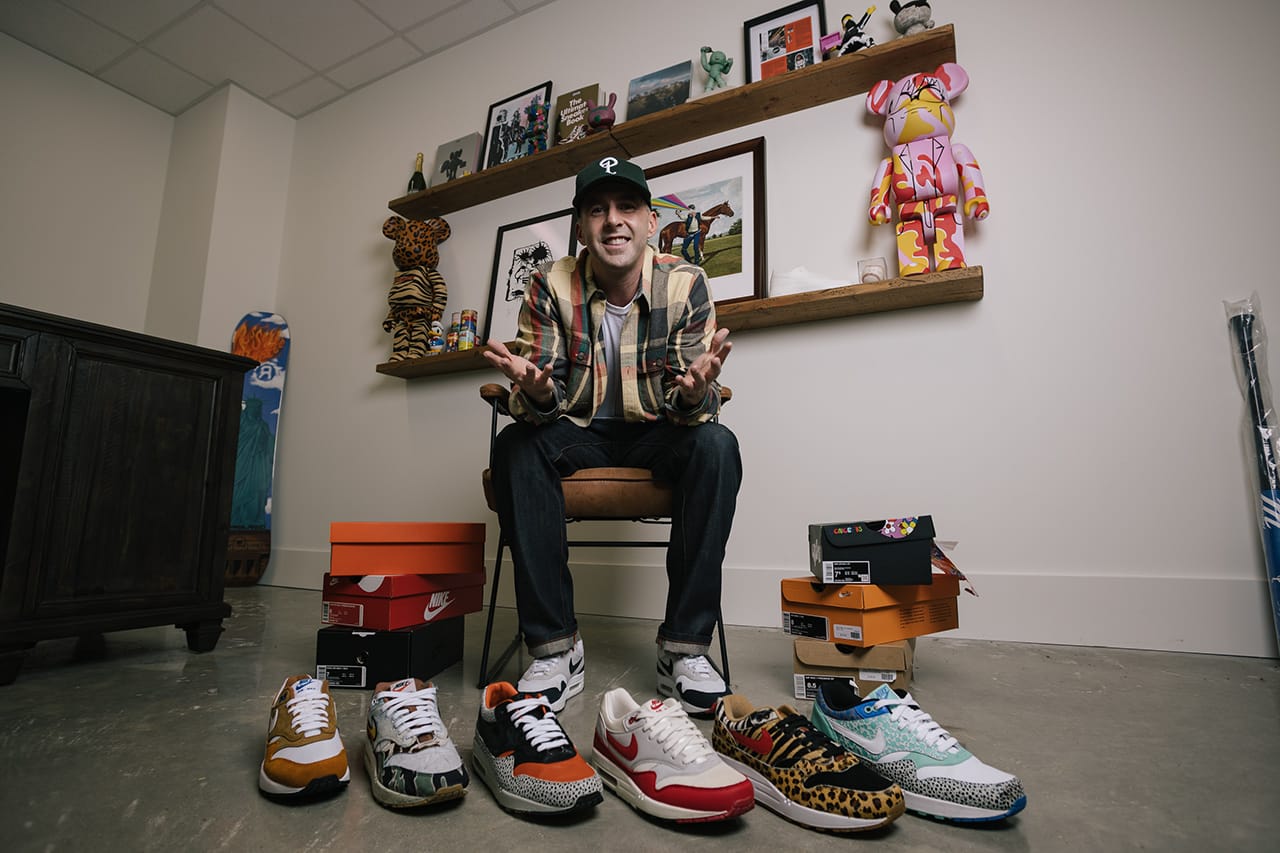 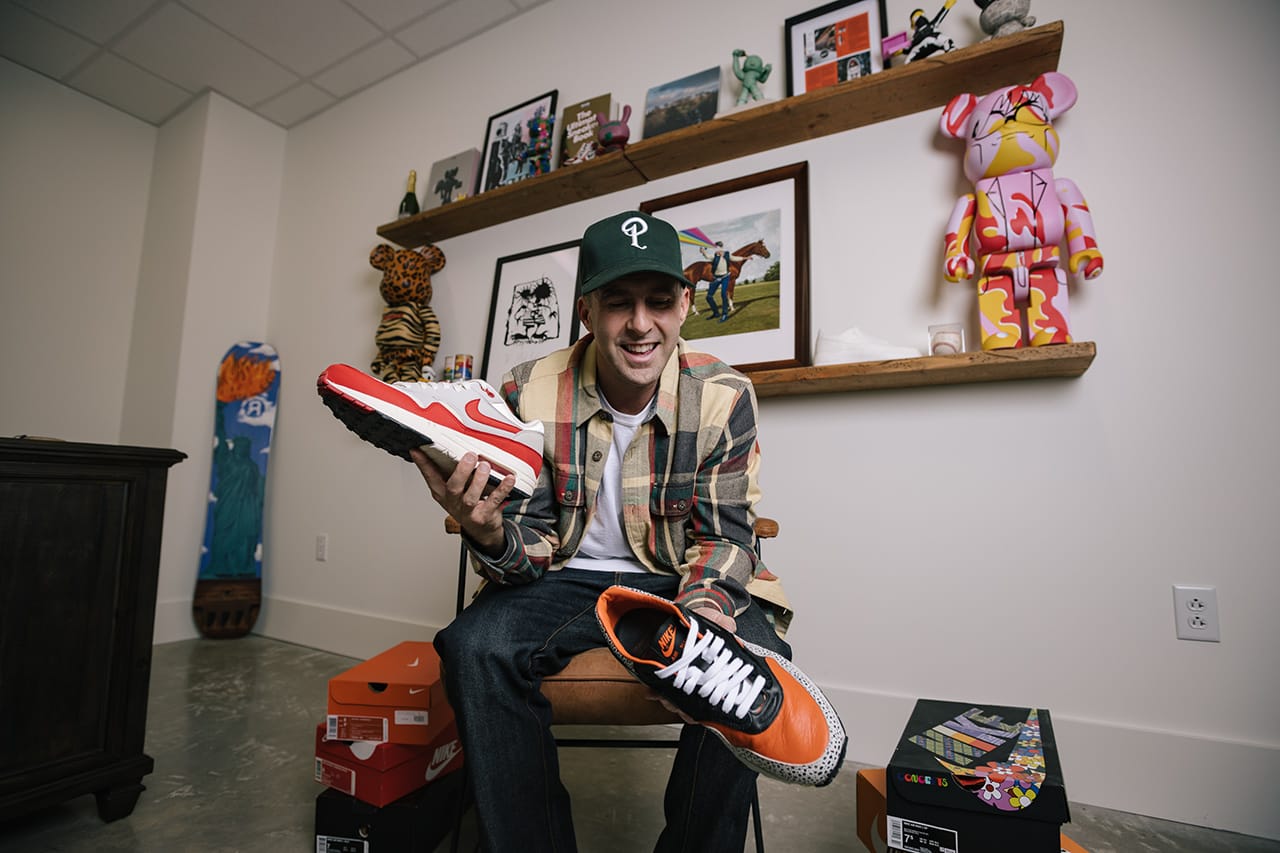 Nike is celebrating 35 years of the Air Max 1 this year. What do you think gives this sneaker lasting power?

It’s such an easy shoe to wear. You can rock them with jeans, with shorts or around the house. They go with everything and fit with any occasion.

Has the conversation of doing a Politics x Nike Air Max 1 ever been brought up? What would you want it to look like if it ever happened?

We have a million designs ready for this. I’ve been waiting for that call all my life! The hard part is picking what concept to run with. This year, we had talks about it, but supply chain issues watered down the 35th anniversary and a lot of projects got put on the back burner. We’re hoping to contribute at the model’s 40-year mark.

“The army teaches you to get up early and get to work. So when I started going through struggles with the boutique and having to sleep on someone else’s couch, I’d remember that I slept on a roof in Iraq for six months. Other people would have folded.”

Now that you’ve gained a sizable amount of experience working on the boutique side of sneakers, do you view shoes differently?

The sneaker industry has definitely changed. I hate certain aspects of the current landscape, but my love for sneakers is still there. I’m still a nerd for a good collaboration. However, I will admit that it was better seeing things on the shelves and holding shoes in your hand as opposed to seeing it first on the Internet.

You’ve had quite an interesting journey as you went from a sergeant in the US Army — which included a tour in Iraq — to working at Finish Line to becoming a successful boutique owner. Talk about this transition.

It had its ups and downs. The army taught me that I don’t want to work that hard the rest of my life. As I started working at Finish Line, seeing their success and falling in love with customers and everything about the shoe industry, it started sparking my interest to open up my own business. The first three years were rough, but I’m happy I stuck with it because everything worked out.

How was the idea of Sneaker Politics first formed and eventually executed?

I was really curious about the industry, especially after traveling to New York and shopping at stores like Concepts, Dave’s Quality Meat and Classic Kicks. As I started to build a relationship with Deon Point, I noticed that he was the only dude that would go out of his way to answer my questions whereas everyone else would brush me off. He cared about my story and gave me the extra nudge to open up my own thing. I wanted to participate in the boutique movement and offer products that big box stores like the Foot Lockers and Finish Lines had so that I could speak to what people in the streets wanted. 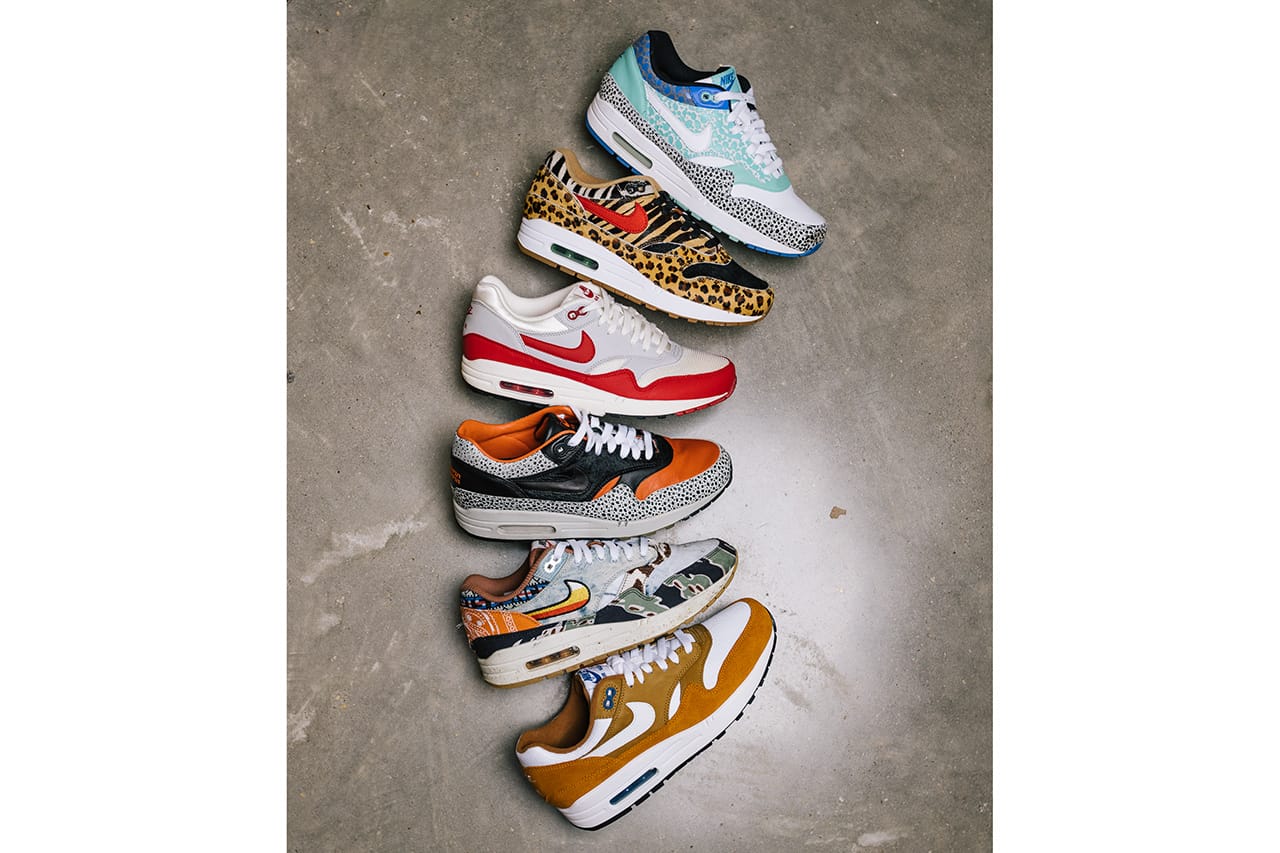 Are there any parallels that you can draw with being in the Army and like being successful or running a sneaker boutique?

The army teaches you to get up early and get to work. So when I started going through struggles with the boutique and having to sleep on someone else’s couch, I’d remember that I slept on a roof in Iraq for six months. Other people would have folded. I would go without food some days and still try my best to help customers as much as possible. It made me hungry and humble.

On the other hand, what were some of your biggest learning lessons from working at Finish Line, and how have you translated that into your own store?

I realized that Finish Line was such a big part of my life for learning the small things, like how to organize a stockroom and how to complete orders. All of the corporate and organizational skills were valuable for me when I decided to open up my own store. Without all of that experience, I wouldn’t have known how to do anything right.

What’s one of your favorite memories of running Sneaker Politics?

One that stands out is our release of the Nike Air Force 1 Low “Questlove.” The shoes released on a Saturday but people started lining up for those earlier in the week, some of which were from San Antonio that drove 10 hours to camp out. We were throwing a Currensy concert that Friday and even allowed the campers to come to the show and come back for the release the next day. We had seen lines before, but nothing of that magnitude and it was a sign that we had done something right.

“It’s the stories and how a shoe comes out that gets a kid today hooked. If there are no stories, that passion will just fade away.”

I’ve noticed that Sneaker Politics puts a heavy emphasis on creating beautiful sneaker content. Why is this such a vital component of your brand?

It all started with when I hired Dustin Guidry who did extensive research on sneaker content and made it a point for us to be the best at photographing sneakers. We’re always trying to push the envelope with our content because we’ve realized that it actually makes a difference in how customers perceive certain sneakers. Our content team is one of our main focuses and we’re never going to forget about it. 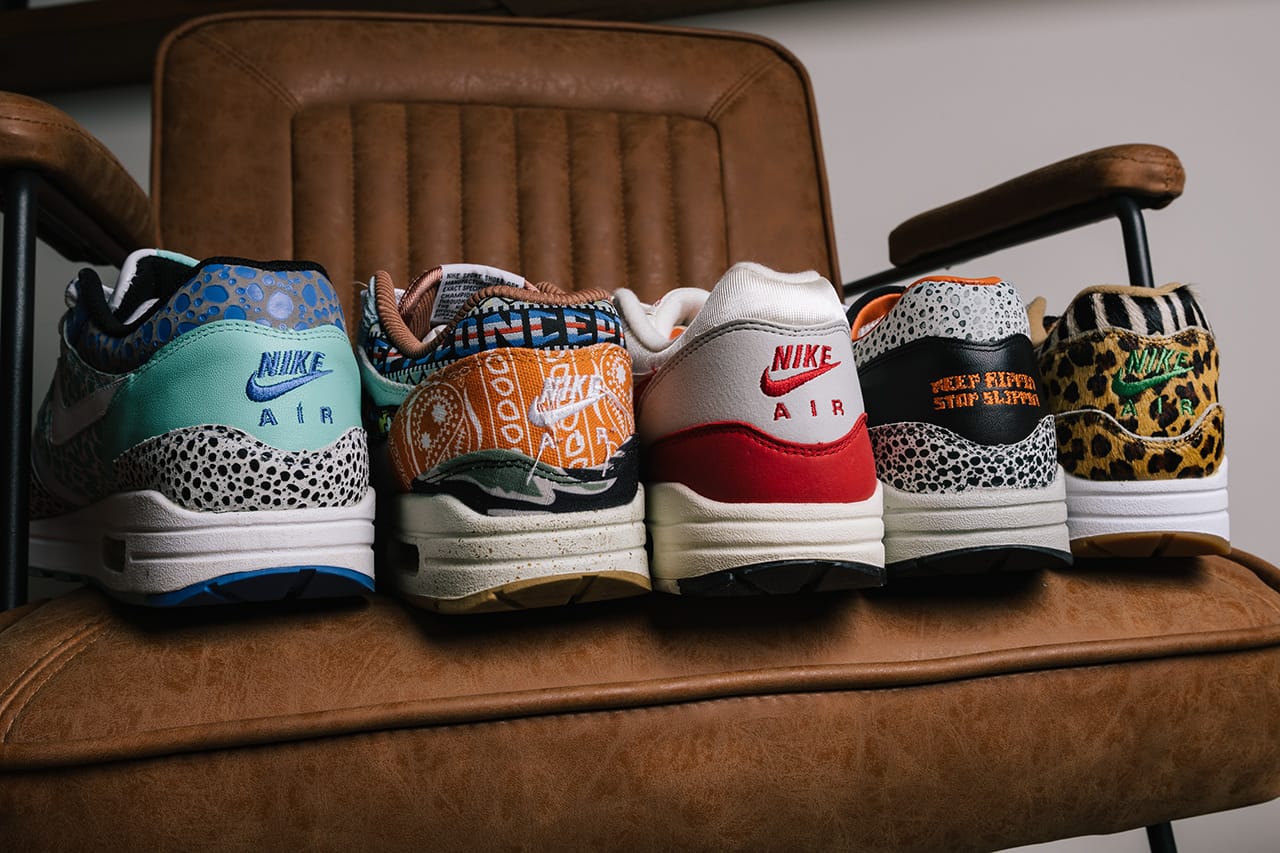 You’ve got a ton of friends and connections in the industry, but you do live in a competitive sphere. How do you think Sneaker Politics separates itself from the rest of the boutiques?

It is a competitive sphere, but I don’t look at it that way. Most of the guys that are my competitors are my good friends and we all own our separate territories. I have the South, someone else has the West and other people own the East. We all work together and have always looked at it as us against the big box stores as opposed to us against each other.

Why are sneakers and their stories important to you?

It’s the stories and how a shoe comes out that gets a kid today hooked. If there are no stories, that passion will just fade away. To this day, I still buy sneakers just because the story is sick, even if I don’t like the actual shoe. It keeps things fun. We’ve told so many Louisiana-based stories that at first we thought were so cheesy. But people around the world have responded so well because they didn’t know that story before and the shoes serve as a window into our culture.
Source: Read Full Article