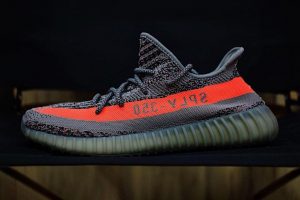 It seems like a lifetime since Kanye West and

Uppers supply a familiar woven mix of gray and black, sprinkled with orange and slashed through the middle with a bright orange post-dyed monofilament side stripe. Just like the original “Beluga,” there’s no heel tabs to be had and oval laces are done up in gray and black. Shimmering reflective threads are woven through the entirety of the upper, providing a pop of reflective style under a camera flash as can be seen in the final photo above. Down below, the look is finalized by a semi-translucent gray midsole that shows the YEEZY BOOST 350 V2’s full-foot white BOOST cushioning setup.

The adidas YEEZY BOOST 350 V2 “Beluga Reflective” is set to release in a full family size run this holiday season, though an exact date of arrival has yet to be confirmed — as does an MSRP.

Elsewhere in the world of adidas, the brand is suing Thom Browne to defend its signature three-stripe trademark.
Source: Read Full Article