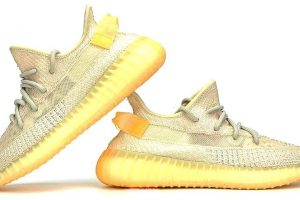 When seen in normal light, the kicks show off its off-white PrimeKnit base layer which comes produced with lighter gray shoe strings and heel tab that have been pre-yellowed to proffer up an aged-in aesthetic. However, UV lighting penetrates these YEEZYs, its upper aforementioned upper components are said to be color-shifting. Images of this effect have yet to surface online, but according to YEEZY MAFIA, the uppers transition into a soft pink tone and the stripes shift into an amber hue. BOOST-loaded midsoles are housed by pastel yellow ribs and rounded off with vintage-y yellow outsole that just so happens to match the heel tabs.

The adidas YEEZY BOOST 350 V2 “Light” is said to be launching this Summer for the usual $220 USD price tag, but adidas has yet to confirm this.