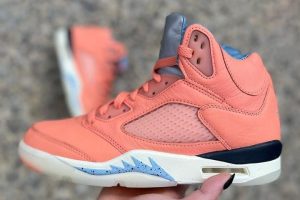 Once again, multi-hyphenate entertainer DJ Khaled has pulled in the attention of the masses with his latest record, GOD DID, topping the Billboard 200, making it his fourth album to do so. However, his music hasn’t been the only thing to brew up excitement. Earlier this year, Khaled announced his latest project with Jordan Brand, including several Air Jordan 5 colorways and an apparel line. Now, a detailed look at the Air Jordan 5 “Crimson Bliss” has surfaced as Khaled has shared another review of the upcoming collection.

Notably, Khaled has shared that the leather used on each pair, including this “Crimson Bliss” look, had to be approved by Michael Jordan himself. Looking closer at this colorway, its signature peach hue outfits the premium leather upper while “WE THE BEST” co-branding hits the heel, sockliner and translucent outsole. In addition, the quilted lining sports “KEEP GOING” text across the left and right shoes.

Despite a steady stream of teasers since being announced this April, a firm release date for the DJ Khaled x Air Jordan 5 “Crimson Bliss” and its accompanying collection has not yet been announced. For now, take a closer look at the colorway above and check out Khaled’s review of the full collection below.