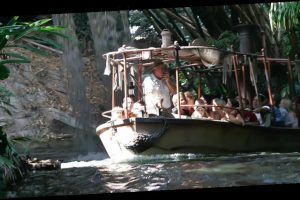 Disney Parks will be updating its Jungle Cruise Ride in Walt Disney World Florida and Disneyland California to “reflect and value the diversity of the world around us.”

According to reports, the two parks will be rewriting the ride’s story, and removing its tribal caricatures and other “negative depictions of native people.” Kevin Lively, a former Jungle Cruise skipper, also revealed in a video that the Mekong Maiden and Kwango Kate boats have been completely wrecked by the jungle, and that a part of the new story will involve going up a tree after the boat splits in half and is overrun by monkeys.

“As Imagineers, it is our responsibility to ensure experiences we create and stories we share reflect the voices and perspectives of the world around us,” Carmen Smith, creative development and inclusion strategies executive at Walt Disney Imagineering, said to the Los Angeles Times. “With Jungle Cruise, we’re bringing to life more of what people love – the humor and wit of our incredible skippers, while making needed updates.”

Chairman Bob Iger shared his excitement about the 65-year-old ride’s updates on Twitter: “The exciting changes we’re making to one of Disney’s most popular classic attractions, Jungle Cruise, reflect our commitment to creating unparalleled experiences that reflect, not only the best in storytelling, but also the values and rich diversity of our world.”

Elsewhere in entertainment, Christopher Nolan might be walking away from his 18-year-long partnership with Warner Bros.
Source: Read Full Article