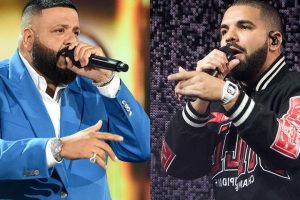 DJ Khaled and Drake have a new collab on the way.

The producer publicly announced the news during his 46th birthday party over the weekend as he opened the gift the OVO head sent him. While on a video call with Drizzy, Khaled shared, “I appreciate everything. Yo Drake — I got some new music coming out with Drake real soon.” He added, “This shit sound crazy, too. The vocals are in!” A title or release date for the new cut was not announced.

Drake and Khaled’s partnership can be traced all the way back to 2010, when the producer enlisted the young rapper for the Victory feature “Fed Up” alongside Usher, Young Jeezy and Rick Ross. The two recently teamed up for the back-to-back singles “GREECE” and “POPSTAR,” which appeared on Khaled’s April record Khaled Khaled.

Stay tuned for more info on the collab.