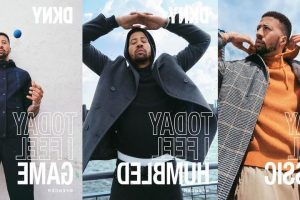 As a pioneer of early ‘90s activewear, athleisure, and elevated street style, DKNY has built its brand from the ground up while highlighting all things New York. And with that territory, the brand is slowly but surely circling back around to its roots, while also championing diversity and mental health with its latest Fall/Winter 2022 collection campaign.

In addition to evoking a seasonal mood of feeling good via its celeb-laden imagery, the new campaign seeks to “feel” its way back to the street style fold with updated classics including plaid windowpane car coats, ribbon-stitched button placket jackets, leather tops and bottoms, grungy footwear and a graphic charity-driven sweatshirt for both men and women.

Additionally, the white long-sleeved sweatshirt is a limited-edition and customizable piece that will retail for $129 USD, and reflects the brand’s partnership with NAMI – the National Alliance on Mental Illness.

The DKNY FW22 collection will be available on the brand’s website with the “TIF” sweatshirt becoming available for preorder and then later available at select global retailers on September 6.