When Phyllis Schlafly crusaded against the Equal Rights Amendment in the 1970s as a threat to all-American motherhood, she handed out freshly baked bread and apple pie to state legislators. She warned of a dystopian post-E.R.A. future of women forced to enlist in the military, gay marriage, unisex toilets everywhere and homemakers driven into the workplace by husbands free to abandon them.

The E.R.A., which had been sailing to ratification, failed. Yet gay marriage is now the law. Women in the military see combat, although women are not required to register for the draft. Six women — so far — are running for president. A record-shattering number of women have claimed seats in Congress. And the percentage of prime-working-age women participating in the labor force has soared from 51 percent in 1972, when Congress passed the E.R.A., to more than 75 percent last year.

So what protections did American women earn without a constitutional amendment? Did the country get everywhere the people pushing for the amendment wanted it to go? These questions, once theoretical, are newly relevant with a push to revive the Equal Rights Amendment. It was left for dead in 1982, when three states failed to ratify it by a congressionally imposed deadline, leaving it short of the necessary two-thirds of the states needed for ratification. But in the past two years, Nevada and Illinois have ratified the amendment. In Virginia, campaigners are pushing the state to ratify the amendment before the legislative session ends on Feb. 23, though ratification is a long shot.

Mrs. Schlafly may not have been able to prevent social changes that transformed the lives of American women, but she did drive a wedge between conservatives and liberals that remains today. “She was one of the early architects of class conflict as expressed through culture wars, as a way to stop the progress of the equality ideals of the professional management elite,” said Joan C. Williams, a feminist legal scholar skeptical about the usefulness of the Equal Rights Amendment. “One of the ironic messages of the E.R.A. is not to underestimate the power of ‘bathroom anxiety’ in pushing the country to the right.”

Some of the very arguments Mrs. Schlafly deployed decades ago resurfaced in the recent state legislature debates. In Nevada, Illinois and Virginia, conservative women denounced the amendment. Women already have equal rights, and an amendment would take away remaining privileges, they argued. It would make it illegal to separate the sexes in bathrooms, college dormitories or school sports, they claimed. Women would lose programs like food subsidies aimed at mothers and female-only scholarships. 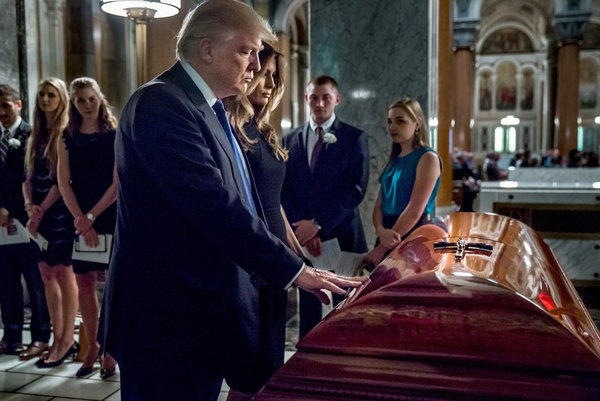 What the E.R.A. would change and what it would not is both bitterly contested and hypothetical. During the 1970s and 80s, a determined corps of lawyers led by Ruth Bader Ginsburg persuaded the Supreme Court to extend the equal protection clause of the 14th Amendment to cover many forms of sex discrimination. After the E.R.A. stalled, legislators passed a bevy of new laws. Together, these had the effect of opening new doors for women.

But advocates point to gaps in existing laws and Supreme Court decisions that have limited enforcement, particularly in the areas of violence against women, sexual harassment and equal pay.

Justice Ginsburg, speaking at the Aspen Institute in 2017, said that while women had come “almost as far” under the 14th Amendment as they would have under the E.R.A., she still believed an amendment had practical and symbolic value. “I would like to be able to take out my pocket Constitution and say that the equal citizenship stature of men and women is a fundamental tenet of our society like free speech,” she said.

Catharine A. MacKinnon, whose legal theories laid the basis for sexual harassment being defined as a form of sex discrimination, has championed the revival of the amendment as a weapon against what she sees as the continuing subordination of women through sexual violence and economic inequality. “You go after sexuality and economics, you’ve gone to the heart of misogyny,” she said.

The Violence Against Women Act, passed in 1994, originally allowed women to sue their attackers in federal court. This was an important provision because of wide variations in the way states prosecuted rape and sexual violence cases, said Erwin Chemerinsky, the dean of the University of California, Berkeley, law school. The Supreme Court struck down that part of the law in 2000. Many laws against discrimination, including the Civil Rights Act, are based on Congress’s power to regulate interstate commerce, but the court ruled that did not apply in cases of sexual violence. This would change with an equal rights amendment, he said.

Attempts to remedy the persistent pay gap between men and women have also fallen short because of rulings saying that gaps must be the result of intentional discrimination in order to violate the law and that many differences in pay are the result of factors “other than sex,” advocates say. If a woman doing the same work as a man is hired at a lower salary because her previous salary was lower, courts have ruled that is not pay discrimination, said Jessica Neuwirth, a co-founder of the E.R.A. Coalition. She believes an equal rights amendment would strengthen Congress’s ability to remedy unequal pay.

The E.R.A. was a touchstone of cultural anxiety when it first ran aground. If the move to renew it gained real traction, would it affect today’s most bitterly fought culture wars?

That, like so many things, depends on the conservative-liberal balance of the Supreme Court. Laws that restrict reproductive freedom obviously have a disparate impact on women, Mr. Chemerinsky said, but the court would have to decide whether such laws amount to discrimination on the basis of sex.

And our understanding of gender has changed in ways unimagined either by the suffragists who first drafted an equal rights amendment when women won the vote a century ago or the backers of the E.R.A. a half-century later. A real push for this amendment now might affect the treatment of trans people and who is legally seen as a man or a woman.

Ms. Williams, the legal scholar, believes the conservative tenor of the current court means justices would choose the narrowest interpretations of an equal rights amendment. Transformative change would be out of reach. Ms. Neuwirth argues just the opposite.

“It’s almost more important in times like these to have very explicit constitutional language,” she said. “If the law says no discrimination on the basis of sex, then no matter what your legal ideology as a judge, the more concrete the language is, the better off people are going to be.”

The Times is committed to publishing a diversity of letters to the editor. We’d like to hear what you think about this or any of our articles. Here are some tips. And here's our email: [email protected].

Susan Chira is a senior correspondent and editor covering gender issues, and was part of a team that won a Pulitzer Prize in 2018 for public service for reporting on workplace sexual harassment issues. @SusanChira