Home » Entertainment » Donovan Mitchell Has Been Traded to the Cleveland Cavaliers

Donovan Mitchell Has Been Traded to the Cleveland Cavaliers 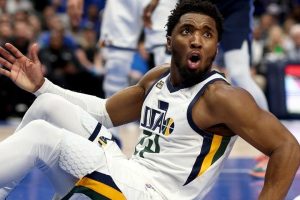 Looking ahead to the upcoming NBA season, there are plenty of storylines in place for an exciting year of basketball. However, the Utah Jazz and Cleveland Cavaliers have decided to shake things up even more with a deal that involves three time NBA All-Star Donovan Mitchell going to the Cavaliers. The deal follows the departure of former Jazz center Rudy Gobert and finalizes the Jazz’ pivot to rebuilding.

Specifications of the package being exchanged for Mitchell include forward Lauri Markkanen, guard Collin Sexton, rookie guard Ochai Agbaji and three unprotected first-round picks for 2025, 2027 and 2029. These picks are also backed by two pick swaps for 2026 and 2028. As a result, the Jazz now have 13 first-round picks through 2029 while also bringing on board two rookies selected in this year’s first-round of the draft. While this is a significant investment for the Cavaliers, they now have possibly the best young core in the league, backed by contracts that should allow the franchise to blossom into a serious contender.