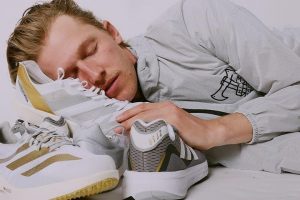 Following the success of its debut link-up last year, adidas and Tinman Elite have reunited for 2022 to release a collaborative three-piece footwear pack.

Based out of Boulder, Colorado, Tinman Elite is a professional running team that has been backed by the Three Stripes since its inception in 2017. Founded by a small group of runners including Drew Hunter and Sam Parsons, the team has gone on to curate a diverse roster containing some of the world’s best runners.

Now teaming up with adidas for a second time, the duo hone in on the new Takumi Sen 8 silhouette, as well as the Adios PRO and the ever-present SL20. Doused in pops of Tinman Elite’s signature white and gold colorway — with the SL20 arriving in a slightly darker tone — each style features the team’s epochal motif and a Tinman-branded footbed.

The full Tinman Elite x adidas collection is set to drop April 22, 12pm (MT), and will be available via the Tinman Elite website. What’s more, the team will be adding golden tickets to a selection of boxes which, if received, will see the recipient fly out to Boulder to experience life as a professional runner.

In other footwear news, Comme des Garçons has returned to the trails with Salomon for SS22.
Source: Read Full Article