Home » Double Take! Inside Celebrity Homes at the Golden Globes

Double Take! Inside Celebrity Homes at the Golden Globes 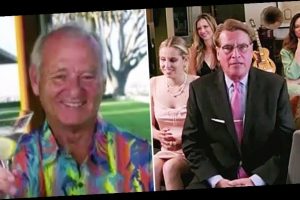 Zoom in! Stars gave viewers a glimpse of their home decor while virtually tuning in to the 78th annual Golden Globe Awards on Sunday, February 28.

Nominees appeared via video chat while cohosts Tina Fey and Amy Poehler took the stage separately in New York City and Beverly Hills, respectively. Though there may have been some technical difficulties as Daniel Kaluuya, Aaron Sorkin and more Hollywood favorites accepted their Golden Globe wins, fans were still fascinated by what they saw behind-the-scenes.

Sorkin, 59, celebrated at home with his loved ones after earning the award for Best Screenplay for Netflix’s The Trial of the Chicago 7, starring Eddie Redmayne and Yahya Abdul-Mateen II. In the background, eagle-eyed audience members caught sight of some fancy guitars.

Other celebs showed off their furry friends while connecting with their fellow nominees as the show neared commercial breaks. Sarah Paulson and Emma Corrin — who both earned nods for Best Actress in a Television Series, Drama — brought their pets out to join in on the fun. Moments later, Corrin, 25, won her first Golden Globe of her career.

“Thank you, thank you so much. Thank you so much to the HFPA for this incredible honor. What!” the Crown star gushed, shocked by the accolade for her portrayal of the late Princess Diana. “Thank you to my Prince Charming, Josh [O’Connor], I could not have done this without you. Thank you for making every single day by my side a complete joy.”

Corrin ended her speech with a special tribute to the inspiration for her performance. “And most of all, thank you so much to Diana,” she continued. “You have taught me compassion and empathy beyond any measure that I could ever imagine. On behalf of everyone who remembers you so fondly and passionately in our hearts, thank you.”

This year, the Golden Globes took place nearly two months later than usual due to the coronavirus pandemic. Presenters appeared in person, with audience seats filled by first responders at the Rainbow Room on the East Coast and The Beverly Hilton on the West Coast.

“This is the 78th annual Hunger Games,” Poehler, 49, joked of the awards show’s bizarre circumstances during her joint monologue with Fey, 50.

Scroll down to see some of the quirkiest details from celebs’ homes!