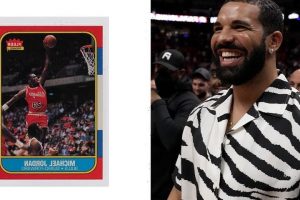 Drake has taken an interest in leaving his luck up to chance lately. Beyond his roulette games, Drake has hopped onto another hobby involving expensive boxes of basketball trading cards.

As luck would have it, Drake managed to pull one of the rarest sports memorabilia in an Instagram Live last night with Goldin Auctions founder Ken Goldin. In one of the boxes, Drake found himself in possession of a 1986 Fleer Michael Jordan Rookie card. Back in February this year, Goldin Auctions sold two 1986 Fleer Michael Jordan Rookie cards for a record-setting $738,000 USD each. Both cards were virtually perfect and were given a grade of Gem Mint PSA 10.

Due to the rise in popularity of sports cards and the ultra-rarity of the current ‘86 Fleer card pulled by Drake, this Michael Jordan memorabilia is expected to go for upwards of $700,000 USD. Aside from this card, Drake also pulled five more Jordan cards including two regular rookie cards and three rookie sticker cards, bringing his total to six. In his box-breaking video with Goldin, he opened packs of 2003-2004 Topps Chrome Basketball as well as a couple of boxes of Panini Flawless basketball.

Take a look at Drake and Goldin below.

In case you missed it, the 2022 Pokémon World Championship dates and venue have been officially announced.
Source: Read Full Article