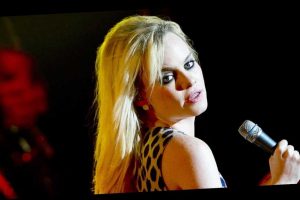 Duffy, who recently revealed that she was kidnapped and raped, wrote an open letter demanding Netflix take down the controversial movie 365 Days.

Celebs Fight Back on Social Media

In her open letter to Netflix CEO Reed Hastings, the “Mercy” singer, 36, wrote that 365 Days “glamorizes the brutal reality of sex trafficking, kidnapping and rape.”

The movie, which is based on Polish author Blanka Lipińska’s book 365 Dni, follows a Sicilian gangster named Massimo Torricelli (Morrone) who tracks down a Polish woman he met five years prior, Laura Biel (Sieklucka), and holds her prisoner. He gives her 365 days to fall in love with him, tempting her with his money and luxurious lifestyle, and promises to set her free at the end of the year if she does not. Throughout the film, the characters engage in increasingly sadomasochistic sex at Massimo’s mansion, aboard his yacht and at other locations.

“This should not be anyone’s idea of entertainment, nor should it be described as such, or be commercialized in this manner,” Duffy wrote in her letter, which Deadline obtained. “I write these words (ones I cannot believe I am writing in 2020, with so much hope and progress gained in recent years), as an estimated 25 million people are currently trafficked around the world, not to mention the untold amounts of people uncounted. Please take a moment to stop and pause, and think about that number, equivalent to almost half the population of England. And of those trafficked annually, no less than 80% are women and girls, and 50% of them are minors.”

The Grammy winner went on to call Netflix “irresponsible” for broadcasting the movie, writing, “It grieves me that Netflix provides a platform for such ‘cinema’, that eroticises kidnapping and distorts sexual violence and trafficking as a ‘sexy’ movie. I just can’t imagine how Netflix could overlook how careless, insensitive, and dangerous this is. It has even prompted some young women, recently, to jovially ask Michele Morrone, the lead actor in the film, to kidnap them.”

Best Picture Oscar Winners From the Past 30 Years

Duffy — who came forward in February with her harrowing story of being held captive, drugged and raped — told the Netflix executive, 59, that she “was lucky to come away with my life, but far too many have not been so lucky.” She also addressed viewers of 365 Days, encouraging them to research “the reality of kidnapping and trafficking” rather than watching “the glossy fantasy depicted in 365 Days.”

More than 50,000 people have signed a Change.org petition calling for Netflix to remove the flick.

Us Weekly has reached out to Netflix for comment.

If you or anyone you know has been sexually abused, call the National Sexual Assault Hotline at 1-800-656-HOPE (4673). A trained staff member will provide confidential, judgment-free support as well as local resources to assist in healing, recovering and more.