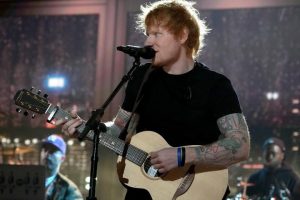 British pop superstar, Ed Sheeran, has just released a new song that pays tribute to the late Jamal Edwards, the founder of the iconic and multifaceted UK music platform, SBTV.

The record lies under SBTV‘s F64 umbrella — a freestyle platform that has been blessed with verses from the likes of Wretch 32, JME, Chip, Jammer, Roll Deep, and more — and the new song from Sheeran pays homage to the founder, who elevated Sheeran’s career over 10 years ago.

Edwards, who suddenly passed last February, helped launch the careers of Stormzy, Skepta, Dave, and more, while many other young creatives around the UK have shared stories about Edwards’ help in allowing them to succeed in their respective fields.

Sheeran’s freestyle was captured inside an empty Stamford Bridge — the home stadium of Chelsea FC, whom Edwards was a life-long supporter of — with the name “Jamal” spelled out in the stands. The singer-songwriter delivers an emotional and raw set of rhymes, reminding everyone that the musician was in fact a product of the UK rap scene before he went on to achieve global success as a pop star.

This latest freestyle from Sheeran on SBTV follows previous performances from the musician, with past videos on the platform coming in the form of his hit single “You Need Me, I Don’t Need You,” in 2010, as well as collaborative efforts with the likes of grime legends JME and Devlin.

You can check out Ed Sheeran’s F64 freestyle above and in other news, check out the new single from Headie One.
Source: Read Full Article