Home » Entertainment » Edward Crutchley SS23 Is In a State of Metamorphosis

Edward Crutchley SS23 Is In a State of Metamorphosis 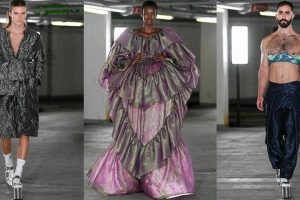 Two-time Woolmark Prize winner Edward Crutchley is a master when it comes to fabric manipulation. Having worked with Kim Jones at both Dior and Louis Vuitton, Crutchley has used his experience to craft collections that consistently comment on English traditions (albeit subverting them) and tap into queer culture. His Spring/Summer 2022 collection was bookended by a duo of 18th-century gowns, expressing elaborate affairs and beauty across the board, while Fall 2022 was a kinky proposition, as stockings, lace underwear, leather and baroque jewels combined on camp couture.

For Crutchely’s SS23 presentation, titled “THE ONLY CONSTANT IN LIFE IS CHANGE,” showgoers were ushered down three flights of stairs into a car park basement, conjuring up naughty nights in the back streets of the big city — a very camp nod from the London-based designer, as per usual. From here, rows enveloped the pillar-clad concrete jungle, with speakers and lights emitting wildlife and natural noises.

Yet, in complete contrast, came the clothes. With Greek mythology inspiring the entire collection, silhouettes were fluid and ethereal, shifting shapes as the almost-opaque metallic silvers and blocks of holographic iridescence engulfed the body — or in some cases left little to the imagination.

All of the fabrics were an interpretation of cloqué, a jacquard double fabric that’s rooted in the couture world. Here, Crutchley used silk and aluminum cloqué jacquard to create crinkles and ripples in the fabric, adding a buoyant effect, while lurex applied to the silk dappled in the candescent lighting in the basement to serve iridescence.

Movement was a core focus for Crutchley, who evoked a sense of drama, regality, and otherworldliness. As the show notes ask, “Sea contra land, flow contra rigidity, myth contra realism, relieving amorphousness contra constricting framework, otherness contra conformity. How can these differences be reconciled?” Simply, Crutchley is commenting on the symbiotic and harmonious relationships between what is real, what is not, and the gray area between.

It all came together on looks that were part ’90s club kid, part Renaissance, and completely camp. From crystalized thongs worn solely with a pair of platform iridescent sandals to lurex trousers in navy that shimmered alongside an extreme under-pec crop piece, or perhaps the multicolored coat that looked like spirals of wood work and the closing look of a simply breathtaking interpretation of a mermaid, Crutchley didn’t miss.

Take a look at the Edward Crutchley SS23 collection in the gallery above. More of Hypebeast’s London Fashion Week SS23 content can be found online and on @HypebeastUK.

Elsewhere, here are the other designers Hypebeast is keen to see this season.
Source: Read Full Article