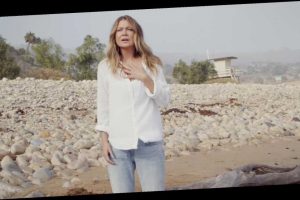 The promos for the Thursday, November 12, season 17 premiere of Grey’s Anatomy were teased as “shocking” and “jaw-dropping.” Well, ABC wasn’t kidding.

In the final moments of the premiere, Cormac (Richard Flood) left the hospital for the night and found Meredith (Ellen Pompeo) unconscious in the parking lot — apparently on the brisk of death.

In her mind, Grey cut to a different thought: reuniting with Derek (Patrick Dempsey) on the beach. Yes, Derek — her husband, Derek “McDreamy” Shepherd, who died years ago. He yelled her name and she spun around and saw him before the episode came to an end.

Following the shocking return, Pompeo, 51, and Dempsey, 54, revealed how the reunion came about, which began by her asking her former costar to go on a hike.

“I had known that Krista wanted to do a beach thing, and I was at the beach. Patrick and I weren’t hiking on the beach, but we were hiking in Malibu, which, you can see the beach. And the idea just struck me so I just said to him, would you ever consider coming and being a part of the storytelling this season?” she revealed in an interview with Deadline. “I know that Patrick has his foundation in Maine where he helps cancer patients and cancer survivors, and that’s a huge effort of his, and I know that it’s important to him, also, to give people hope, and give people joy, and we wanted to bring something to this moment.”

Pompeo noted that she explained that having the reunion during a time of “so much darkness” would provide a “ray of light” for fans — and he loved the idea.

“We had a ball filming it,” she said. Dempsey echoed the sentiment, adding that they wanted to do something for the frontline workers and to make people feel better.

“I think the whole atmosphere has changed, certainly working at the beach, and seeing everybody again was really a very healing process, and really rewarding, and a lot of fun,” the Bridget Jones’s Baby actor said. “And hopefully, that feeling translates, and the fans enjoy it. I know that they’ve been wanting us to get back together, and I think this will satisfy a lot of people, and surprise a lot of people, hopefully.”

The Maine native also explained that it felt “very special” and “really comfortable” filming together again. Pompeo added that the spark came back immediately.

“It’s like riding a bike. We just have a chemistry and a dynamic that’s always served us well, and I think we have a genuine affection for each other,” she said. “It was very healing to come back, and know that we’re doing something good, putting out a positive story, a healing story, going to make people smile.”

Plus, fans can expect to see more of Derek. “It’s more than the one scene,” showrunner Krista Vernoff said. “Patrick and Ellen and I were all there at the beginning of this; I wasn’t there for the pilot, but I was there for the first seven seasons, and that was 17 years ago. That was, like, a lifetime ago; my kids weren’t alive. It was so wild to walk out on that beach, and just be together again as these different people that we are now. But I can’t overstate how joyful and healing an experience this was.”

See photos of the reunion below.