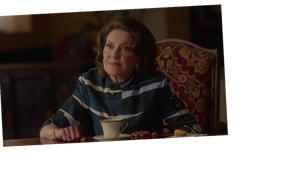 "Hold on, I’m looking up ‘aneurysm’ in our medical dictionary to see if I just had one."

Emily Gilmore might not be a Gilmore by birth, but if anyone set the tone for Gilmore Girls, it was her. The matriarch of the family began the series as Lorelai’s overbearing and disapproving mother, but quickly proved to be just as funny and quick as her daughter and granddaughter. In fact, based on these Emily Gilmore quotes from Gilmore Girls, it’s clear where Lorelai and Rory got it from.

Throughout Gilmore Girls‘ seven-season run, no one, and I mean no one, could deliver an insult the way Emily could. Her wit, her sass, and her ability to hit exactly where it hurts were unparalleled. Unlike Lorelai, who famously enjoyed a speedy chat leading up to a joke — "Oy with the poodles already" — Emily preferred a more take-no-prisoners approach. For most fans of the show, being on the receiving end of one of Emily’s withering stares or biting comments would be a genuine honor. And yet she rarely gets her due credit. Here are are just 13 Emily Gilmore one-liners from Gilmore Girls that should be appreciated way more.

Wear a piece of clothing that is not Emily Gilmore-approved? You might as well parade around town naked.

Emily never missed an opportunity to take a dig at her daughter, even if it meant criticizing her in front of Rory. Never mind that insulting your granddaughter’s only stable parental figure is, uh, not exactly good etiquette.

This perfect one-liner was originally delivered over the phone in the early 2000s, but I think it’s safe to say it would be equally as effective via text message now.

Looking for a quick and effective way to shut down a conversation and gain control of a social encounter? Take a cue from Emily Gilmore.

Nothing incites guilt in your child quite like invoking your eventual death. And for those who don’t have kids, this is a great way to pester anybody younger than you who is late for something. "Sorry I didn’t wait for you before ordering food, but my life isn’t as long as yours." Zing!

Emily had this response when Christopher informed her of his "maid-nanny combo," and frankly, I’m still recovering from the shade.

In Emily speak, "used" means "leftover," which means she’d probably consider every meal of a 20-something "vintage."

This has been "How to Stop Someone Who Talks Too Much 101" with Emily Gilmore.

There is no one-liner better than Emily asserting her comedic dominance over her daughter in front of friends at Thanksgiving dinner.

Like most mothers, Emily knew the power of invoking the S-word. For her, "single" didn’t mean "single." It meant "dying alone."

Only Emily Gilmore would find such a piercing and hilarious way to say, essentially, "ping pong is so basic."

Emily Gilmore doesn’t hold her tongue for anyone — even the police officer who’s just pulled her over.

Another dig at her single daughter, this one is likely underrated because of its simplicity. But one cannot deny the brilliant effectiveness of telling your daughter you wish she had a husband…only so she could murder him.

END_OF_DOCUMENT_TOKEN_TO_BE_REPLACED

END_OF_DOCUMENT_TOKEN_TO_BE_REPLACED
We and our partners use cookies on this site to improve our service, perform analytics, personalize advertising, measure advertising performance, and remember website preferences.Ok