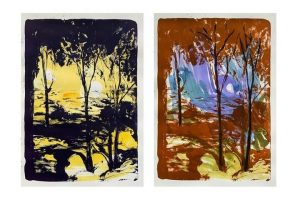 Emma Webster is not a traditional landscape painter. Instead of depicting the great outdoors, the Los Angeles-based artist turns to technology to create illusionary environments that exist between fantasy and reality.

For those of you who couldn’t attend her solo exhibition at Stems Gallery in December, Webster has released a series of lithographic prints titled La Nouvelle Epoque (The New Era). Each of the 50 prints vary in execution and largely depict recognizable forms — trees, water and several orbs in the likeness of a sun or moon.

The artist begins her process by first sketching out a rough outline of the scene and proceeds in scanning and distorting each constituent element through a virtual reality (VR) program — resulting in hallucinogenic landscapes that fuses her interests in theater, set design, photography and art.

La Nouvelle Epoque is a lithograph print with hand-painted features in watercolor and ink. As an edition of 50, each print is available to purchase for $2,000 USD via Stems.