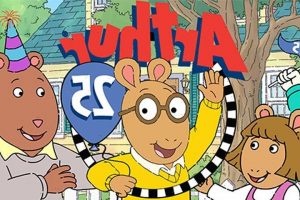 With Arthur coming to an end after 25 seasons, many fans that grew up with the PBS show tuned in to see the final “All Grown Up” episode.

As the longest airing kids show — available in 80 countries — kids across the globe all have their own memories involving the anthropomorphic cartoon aardvark. The last episode tugged at the heartstrings of fans in a profound way as many of the viewers are also “all grown up,” experiencing the real-world responsibilities that the characters of Elwood City are now facing.

What made the episode even more special was the fact that the original voice actor of Arthur — Michael Yarmush — returned to voice the adult Arthur, and that the librarian who handed Arthur the instructional illustration book, which leads him to become a graphic novelist, was voiced by Arthur creator, Marc Brown.

As expected, the emotional tweets began pouring in with the hashtag “#Arthur25” with personal Arthur stories from around the world. Take a look below at what some fans had to say about the end of the iconic children’s show.