Home » Entertainment » “Encanto,” “West Side Story” herald growing Latinx influence in movies, but Denver has a ways to go

“Encanto,” “West Side Story” herald growing Latinx influence in movies, but Denver has a ways to go 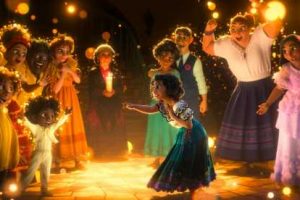 With Disney’s “Encanto” in theaters next week, and Steven Spielberg’s “West Side Story” and Aaron Sorkin’s “Being the Ricardos” arriving Dec. 10, Latinx voices are having a moment U.S. cinema, injecting a diverse set of cultures long ignored by TV, books, movies, video games, stage shows and news media.

Lin-Manuel Miranda, the creative force behind Broadway’s “In the Heights” and “Hamilton,” has revolutionized the kid’s side of things, writing songs for multimillion-dollar Disney productions such as “Encanto” — set in the mountains of Colombia — but also “Moana” (for which he won an Academy Award).

“It’s become a lot more mainstream in the last 10 years, because when my kids were growing up, they had none of those things,” said Elizabeth Renee Fajardo, director of Chicana/o Studies at Metropolitan State University of Denver.

Big-budget family films set in Mexico, or that embrace Spanish language and musical influences, have been part of the trend, including 2017’s Pixar film “Coco” and 2014’s “The Book of Life.” “Encanto,” which hits theaters on Wednesday, Nov. 24, tells the story of the Madrigal family from daughter Mirabel’s perspective, adding South American tones to Disney’s widening palette and new batch of songs destined to become family sing-alongs.

Amid these successful crossovers, streaming giant Netflix spent $200 million to produce content in Mexico last year (an amount that’s expected to grow this year), while Disney+ launched its Latin America service on Nov. 17, according to the Los Angeles Times.

In the city and county of Denver, Latinx people make up about 29% of the population, the U.S. Census Bureau reported. That has not frequently been reflected in public cultural offerings, Colorado arts leaders say, and in some cases, it’s still difficult to find Spanish-language or Latinx-friendly programming in the city.

But it’s improving, Fajardo said. Bilingual and Spanish-language shows from Colorado Symphony and Denver Center for the Performing Arts service school children and low-income families, while smaller theater companies such as Su Teatro are being recognized for their years-long efforts with popular shows like “Northside,” which grapple with racial identity and gentrification. New bilingual signage at museums, galleries and tourist magnets like Meow Wolf are also acknowledging the diversity of their visitors.

“My father would have gotten in trouble if he spoke (Spanish),” said Fajardo, who’s also chairwoman of the Chicano Humanities & Arts Council. “A whole generation had nothing to pass on.”

Now in their 20s and 30s, Fajardo’s kids were among the last to grow up in a U.S. media sphere that ignored their existence. It’s taken two generations to get it back, but her grandchildren are now proudly bilingual and consuming media that’s increasingly so.

“The rise of Netflix and global programming that’s in Spanish and subtitled — or even dubbed from Spanish — was something we never thought was going to happen,” said Peter Markham, CEO of Estrella Media, a Burbank, Calif., company that owns a dozen-plus Spanish-language radio and TV stations in the U.S., including in the Mile High City. “Denver right now is in that power-alley for us in terms of (audience) engagement.”

In addition to a broadcast network that reaches about 40 million homes, including through its Denver affiliate, Estrella is in the process of bulking up its kids’ programming. The Spanish-language Univision network, which also operates a Denver affiliate, this year also launched its free, kid-focused PrendeTV, an ad-supported service for mobile and connected-TV devices such as Amazon Fire and Roku (or at prende.tv).

From Hollywood flicks and telenovelas to kid’s comedy and educational programs, the Univision app is deep dive into the market, with more than 140 titles, 1,000 hours of preschool-aged content, and animated fare, said Julissa Bonfante, vice president of content publicity, via email.

Telemundo, another major player in Spanish-language TV, also operates a Denver station. Officials there did not respond to requests for comment.

“Hispanic culture is coming in on its own terms as it seeps into the culture,” Estrella’s Markham said. “Our Hispanic audience tends to watch as a multigenerational family, so they’re all exposed to different types of programming. It’s a huge consumer base that’s becoming more and more important to advertisers as they build wealth. And growing up in cities like Denver, your kids aren’t tied to those traditional cultural identities as they mix with others.”

“That’s a huge change from 20 years ago,” he added, “because it’s not vanilla-ized for general audiences.”

The growth of Latinx and Hispanic voices in mainstream arts and entertainment — particularly in children’s programming — has mirrored their demographic growth in the U.S. Hispanics and Latinx people are now nearly 20% of the population, or about 60.5 million people, the 2019 U.S. census found. That’s a 70% jump since 2000, making Latinx people the second-fastest-growing racial or ethnic group in the country, according to Pew Research Center data (Asian Americans are the No. 1 group).

In southern Colorado and northern New Mexico, Hispanic and Latinx people have been living and absorbing other cultures prior to the area becoming part of the U.S. and, even before that, Mexico, with a unique language and culture known as manitos — itself discriminated against by Mexican immigrants and the Indo-Hispano populations a century ago, according to the Manitos Digital Resolana project.

They still lack media representation, owing largely to their relatively small population, but are another example of a demographic that may embrace the increasing Spanish-language TV and film world — blending even more cultural perspectives in the process.

“Having all of this mainstream characters that speak in English and Spanish and Spanglish is a wonderful role model for kids,” said Fajardo, whose Chicano Humanities & Arts Council has programmed dozens of Spanish, Spanglish and bilingual events for Denver families at museums, libraries and other venues. “I would have given anything for my parents or grandparents to have these same options when they were raising their own kids.”

Subscribe to our weekly newsletter, In The Know, to get entertainment news sent straight to your inbox.