Every Christmas Eve, a Lone Choir Boy Sings to More Than 370 Million

CAMBRIDGE, England — At 3 p.m. on Christmas Eve, as shadows lengthen, candles flicker, and a solemn quiet envelops the medieval chapel of King’s College, Cambridge, Stephen Cleobury, the music director there, will point to one of his boy choristers. The boy — who won’t know in advance that he’s the chosen one — will steel himself and sing into the darkness the first verse of “Once in Royal David’s City”: Plaintively alone, but heard around the world.

Nobody knows exactly how many people listen to the annual Festival of Nine Lessons and Carols from King’s, but it’s a worldwide broadcasting phenomenon. The BBC says 370 million people hear it through its global broadcasts, but there are countless others in the United States, Australia, Africa and Asia.

A serene liturgical parade of music, words and wonder that expounds the Christmas story, the Festival of Nine Lessons and Carols is the high point of the year for King’s, a University of Cambridge college with a celebrated choir that sings in its chapel almost every day while classes are in session.

And this year will be special: Partly because it’s the 100th Lessons and Carols, but also because it’s the last time Mr. Cleobury — who has held one of the most coveted jobs in church music for longer than most people can remember — will be in charge.

Something about the Lessons and Carols’ serene liturgy of music, words and wonder touches a nerve. It seems embedded in the DNA of Christmas, a tradition from the ancient past. Except it isn’t.

It was started in 1918 by a young Anglican priest who had returned to Cambridge after serving in the trenches of World War I. He called it a “festival,” but it was also a commemoration for the war dead, with a so-called Bidding Prayer for “those who rejoice with us, but upon another shore and in a greater light.”

It established a precedent, and churches and cathedrals copied the new liturgy for themselves — to the point that the format of Nine Lessons and Carols became a standard at Anglican churches around the world. 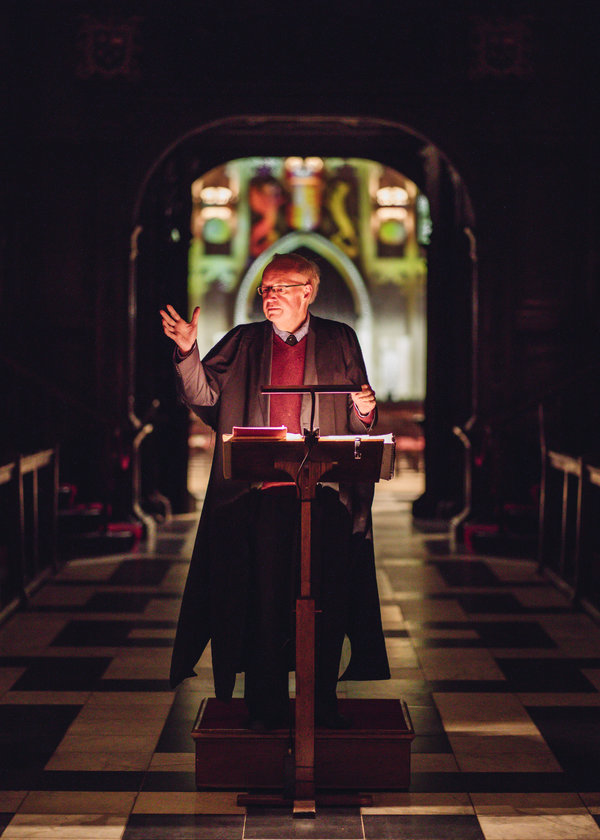 King’s has the most celebrated men-and-boys choir in the world, one admired for an enduring vocal purity and beauty that the world imagines reaching back in time just as the Lessons and Carols do. But again, that isn’t quite the truth.

The choir is certainly old, established in 1441 when King Henry VI gave money to the chapel to establish a choir of boys and men. But it fell into decline by the 18th century: The choir’s boys were rough and unruly, and the men were aging local tradesmen juggling chapel duties with their jobs as butchers, bakers or occasionally servants at the university’s colleges.

The choir only approached its current status in the early 1900s when the organist A. H. Mann started to turn things around, training the boys properly, replacing the men — known as “lay clerks” — with musically gifted university students on special scholarships. And it wasn’t until the 1930s that his successor, Boris Ord, developed what became known as “the King’s sound”: soft, reserved and — according to its critics — emotionally inhibited.

Emotion certainly took second place to beauty under David Willcocks, Mr. Ord’s successor from the 1950s to the 1970s. It was Mr. Willcocks who made the King’s choir a recording star, through more than 60 LP.s that became the benchmark for ambitious choirs worldwide. And it was done with discipline: The choir had to deliver pure, ethereal perfection, every note immaculately tuned and placed.

The baritone Gerald Finley sang in the choir as a student in the 1980s, before progressing to stardom of his own as a soloist. In a recent interview, he recalled that Mr. Willcocks used the chapel’s resonant acoustics to justify his ultra-strict approach. “Because if you made a bad sound you’d have to suffer it for six seconds,” he said. “One geeky choral scholar calculated that if you made a mistake on Christmas Eve, the combined number of people listening on radio with the chapel echo would be like one person hearing that mistake continuously for 24 years.”

If time moves slowly in King’s College chapel, so does its turnover of music directors. Mr. Cleobury has run the choir for 36 years, arriving in 1982 with, he insists, “no conscious intention to change things or put my stamp on the sound.”

But a new double-CD issued to celebrate the Lessons and Carols centenary, including excerpts from old broadcasts, proves that things have changed over the years. The sound is more robust, less precious than it was. The cut-glass vowels of the 1950s are gone. And there’s a more idiomatic response to a wider range of music.

Each year since Mr. Cleobury’s arrival, a new carol has been sung there on Christmas Eve. It doesn’t always please members of the listening public, who write in to say so, but it has refreshed the Christmas repertoire with modern classics like John Tavener’s “The Lamb.”

This year’s piece is by the composer Judith Weir, who studied music at King’s in the 1970s when “the college had only just started taking female undergraduates,” she said. “I didn’t have much to do with the chapel, partly because it felt like a male preserve.”

In some ways it still is, with a choral sound so emphatically defined by men and boys. “There’s no real call for it to be otherwise,” Mr. Cleobury said. “It’s a tradition that has been my challenge and privilege to maintain.”

Having maintained it for so long, it will be an emotionally charged moment when, on Monday, he points to that boy chorister for the last time. Next year, the task will fall to Daniel Hyde, 38, a precociously eminent organist and choirmaster who has been announced as his successor.

Mr. Hyde became music director at St. Thomas Church Fifth Avenue in New York less than three years ago, but he is returning to Cambridge because, he said he “couldn’t pass on” the opportunity.

“Stephen Cleobury’s dedication to King’s has lasted almost as long as I’ve been alive,” he said. “It’s a once-in-a-lifetime opportunity to follow him. And it will feel like coming home, because I was an organ scholar at King’s and remember December evenings locked in the chapel, practicing for the Lessons and Carols.”

“One year it snowed, another year the heating failed and we froze,” Mr. Hyde said. “But it was magical to be part of all that. Who wouldn’t want to be part of it again?”

The Festival of Nine Lessons and Carols service will be held in King’s College chapel in Cambridge, England, at 3 p.m. on Dec. 24 (10 a.m. Eastern) and broadcast around the world.