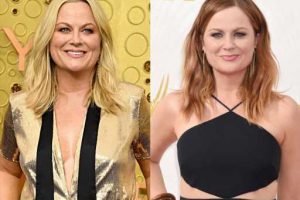 Amy Poehler is an Emmy Awards regular, and considering her 22 nominations and 2016 win for Outstanding Guest Actress in a Comedy Series for her co-host role on Saturday Night Live, her ongoing success is clearly what keeps drawing her back time and time again.

The Hollywood tycoon, who started as a comedian but has since added actress, writer, producer, and director to her resume, has even presented at the annual event several times, most notably with bestie Tina Fey in 2013 and fellow comedian Amy Schumer in 2015.

Presenting, receiving nominations, and winning awards aren’t all Poehler does at the Emmys, though — she also looks stunning on the red carpet, mixing up her style a bit each year but always delivering a fashionable look. As a celebrity who isn’t necessarily known for her style, a number of her looks are quite impressive, namely her shining art-deco gown circa 2014 and her simple yet sultry 2013 ensemble.

The comedic genius has attended the awards nearly every year since her first appearance in 2006, and that means she’s delivered nearly 20 years of red carpet looks to relive as we eagerly await this year’s Emmys — read on for Poehler’s style evolution over the past two decades at one of the biggest events in Hollywood.